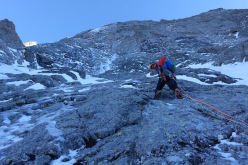 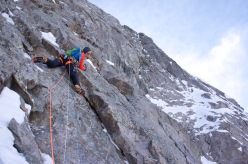 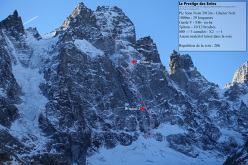 French alpinists Benjamin Brochard, Fred Degoulet and Jonathan Joly have struck it big, right at the start of this autumn climbing season, with the first ascent of a long and difficult new ice and mixed route up the severe North Face of Pic Sans Nom, in the Écrins massif in France’s Dauphiné Alps,

The new route is called Le Prestige des Écrins and follows a long series of ice gullies, first spied at the start of this year by Joly and Degoulet. Unfortunately the next day it began to snow and the two had to postpone the ascent until this autumn when a friend, on his return from Goulotte Grassi (Giancarlo Grassi, Renzo Luzi, Franco Salino 3/071980) on Ailefroide, took a photo of the north face of Pic Sans Nom which clearly showed that the ice slivers had formed completely.

At 8:00 on Monday 19 October Brochard, Degoulet and Joly started up the three-hour approach, planning on climbing the route in two days and spending just one night therefore on the face. However the climbing proved more complex and harder to protect and progress was slowed, so much so that after just 5 pitches they decided to call it a day. They dug out the bivouac, climbed one more pitch and fixed it, and then spent the night on the face.

The next morning the trio ascended the fixed rope and continued upwards, climbing for circa 10 hours, past difficult mixed sections that proved difficult to protect. After 11 pitches and still a long way below the summit they stopped for their second, this time unplanned, bivy.

With supplies running low the objective on day 3 was simple: exit the face. The three continued up into the unknown and climbed another 13 pitches to reach the summit at 15:00. Despite being finally in the sun once again, the climb was far from over: the Frenchmen still had to descend down the famous Pic Sans Nom South Face. Fortunately this was carried out without encountering particular difficulties.

In total Le Prestige des Écrins, first ascended in alpine style, weighs in with 29 pitches and 1000m of ice and mixed climbing with difficulties up to V, M6+, 6a.

For further information check out: www.ecrinsprestige.com