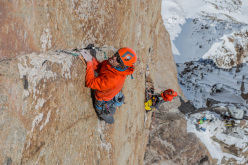 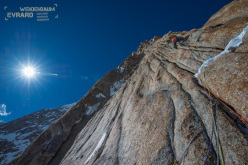 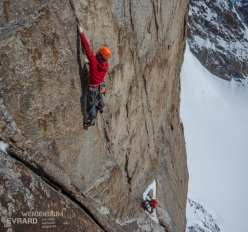 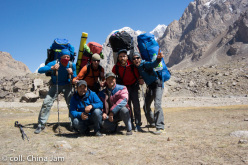 Interview with Nicolas Favresse after the ascent, carried out together with Sean Villaneuva, Stéphane Hanssens and Evrard Wendenbaum, of the South Pillar of Kyzyl Asker (China) last September.

As previously reported, at the end of September the climbers Nicolas Favresse, Sean Villaneuva, Stéphane Hanssens and Evrard Wendenbaum climbed a beautiful 1400m line, all free up Kyzyl Asker in China. At the time they knew that their chosen line up the South Pillar touched on the Russian route, established over 8 days in 2007 by Alexander Odintsov, Alexander Ruchkin and Misha Mikhailov. On their return the Franco-Belgian team compared route lines to find out more and the result is that the two teams chose very similar lines, so much so that after touching upon each other, from Camp 3 to the summit the two are pretty much the same identical line. These things happen - especially when you choose "the best looking, most obvious line" - and this detracts nothing from the overall experience that the four endured for 14 days on the wall. "Maybe we could define ours as an alternative start seeing that we started at the base of the 400m pillar instead of avoiding this by ascending the snow ramp" explained Favresse, adding "The point though is that the climb is spectacular. The Russian ascent was done in a very nice and impressive style, they climbed the pillar and took almost everything to the top before going down the other side. Impressive..." As impressive as the experience of Favresse, Villaneuva, Hanssens and Wendenbaum which is a great mix of climbing and alpinism, adventure and suffering. And also, in pure Favresse and Co style, music and fun!

Nico, Kyzyl Asker was not your original plan. Why did you change idea and why did you eventually settle for this peak?
In fact we had no plan. We had simply heard that this area had lots of potential with virgin walls and peaks. So we spent the first week just exploring all the valleys, looking for cool objectives and hoping to do a few lightweight alpine pushes. During the first week the weather was particularly unstable so all attempts to climb were aborted by daily heavy snow storm. We found many cool walls but most of them plastered with snow and ice, unless South facing. We saw Kyzyl Asker for the first time at the end of our first week of exploration and it had all the ingredients we needed for a cool ascent. It is south facing, very long, very tall, perfect rock and a beautiful line. Plus with the unstable weather we knew our best option would be to go big wall style to take advantage of even the smallest weather window.

How did you choose your line? Were you aware of the Russian route?
We chose the South Pillar because it's clean, safe, steep and the best looking line to our eyes. There were really no other lines we hesitated with. It is the obvious, best one! We knew about the Russian route but we were not sure exactly where it went. On the upper part of the wall we saw a few pitons so we knew the Russians had passed by there, but at the same time it was the obvious line and there was no logical alternative so we chose to climb what felt natural to us.

So before setting off, what did you expect?
We thought it would be technically a lot harder, but it is never easy to anticipate the difficulty beforehand. The hardest rock pitch was of about 7b. There was one perfect overhanging splitter crack that Sean worked and almost did, but it wasn't the line of weakness. It was simply a perfect pitch of big wall cragging, right next to our second portaledge camp. It was harder than all the rest and in the end we had to keep moving so we returned to the obvious line of weakness in order to continue with the free climbing challenge. Having said that, doing hard free climbing with those cold temperatures was very difficult indeed! Every night it was about -15°C, while at the very warmest time of a perfect sunny day our thermometer would show -5°C. This meant we could only do some hard free climbing when there was no wind and some sun, and by the afternoon our bottles of water were just a block of ice. We certainly had not excepted such cold conditions. And there was also a lot more mixed climbing than expected.

On the final section...
The last 400m were all climbed with crampons and ice axes. There were a couple of difficult mixed pitches. We don't have much experience with mixed climbing but I believe the difficulty was pretty similar to Pinocchio on Mont Blanc. There were also some beautiful ice pitches and easier snow slopes.

How was the route protected?
We didn't need to use a hammer during the entire climb. We found good natural pro all the time. We placed no pitons or bolts, so we left behind only our rap anchors. We found about 4 pitons left by the Russians and one fixed rope which we took down with us.

You topped out at 22:00. That's pretty late...
Yes, the summit was further than we had estimated. Because it had snowed all day before our summit push we chose to start not too early, in the hope that the snow would clean up a bit. Also, Steph didn't feel so good that morning and this made us lose some time, too. It was hard to enjoy the summit because it was so cold. There was a biting wind and I only managed to enjoy the thought that in a few days time, when looking back at the mountain, I would finfally feel complete.

What about the descent?
The way down went well but it was really cold. We did about 15 long raps and we reached our ledges at about 4am. It took me about an hour and a half to get my body warm again. Steph's feet were as hard as frozen chicken!

The expedition was called China Jam. We already know you, Sean Villaneuva and Stéphane Hanssensfrom previous expeditions. The time has come now for you to introduce us to the newest member of this session, Edvard.
In the past we have always avoided having someone extra just for filming or taking pictures because we always thought it would change the atmosphere of our adventure by making it less natural. This time we chose to cut our routine and try something new. But it is also mainly because we had met Evrard and he seemed the perfect person to fit to our style. In the end when I look back at the weather conditions and temperature, I know that without Evrard would not have been able to have such images. But it did affect our climbing a bit, with all the extra equipment for filming, we were heavier and slower. Taking images in such place is always a compromise. But I have to say that Evrard was really good at keeping things natural, and all the while it was hard work for him.

14 days on the wall. Tell us about progress
Mainly slow but constant. Because we were late in the season we had only short days and with the low temperatures it was difficult to get early starts or late finishes. We had a lot of snow storms as well with 3 days completely stuck in our portaledges. The daily snow melting took also lots of time. I guess the weather condition were what we fought against most on this route.

So what are you most proud of?
For me the biggest difficulties were dealing with the cold temperatures, for so many days. It really drained my body. So I guess I'm proud of the fact that we pulled it off with the best style we could in these hard conditions.

Last question: how do you all interpret this climb? After Patagonia, Baffin, Charakusa valley, Greenland and Venezuela to name just a few. Is it a step forward and if so how and why?
I'd say it's just something different. It was a powerful experience. But I would have preferred it had the temperatures allowed us to challenge ourselves more rock climbing.

China Jam - Big Wall Adventure Film
A crowdfunding campaign has been launched to make the adventure film about this group of four climbers, struggling in harsh conditions to open a new route on a remote Chinese's peak. To find out more check out: www.indiegogo.com/projects/china-jam