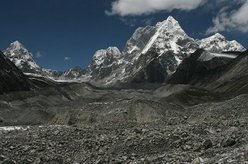 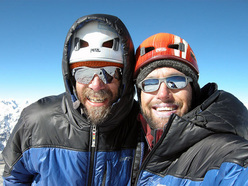 Americans Joseph Puryear and David Gottlieb have made the first ascent of Jobo Rinjang (6,778 meters) via the direct South Face. This mountain is a satellite summit in the Lunag massif, Khumbu Region of Nepal.

The highly experienced Americans, who last year made a daring first ascent of Kang Nachugo in the Rolwaling Valley, climbed alpine style over 6 days following a gigantic swath of ice directly up the 1700m face which weaved a way between rock bands and two ice cliffs high on the face.

After an initial period spent acclimatising the duo set off on April 20 and navigated dangerously to the base of the wall proper. Early the next morning they embarked on what they describe as being their hardest day in the mountains to date. Seeing the curriculum of ascents, from Alaska to Tibet, these words shouldn't be taken lightly. Dodging rock fall and simul climbing wherever possible, after 21 hours on the trot they finally managed to establish Camp 1 at 6500m.

Dawn broke with stable weather and the two continued as the terrain changed from ice to their favourite terrain: steep unconsolidated snow flutings which eventually led to the summit. They camped here and the next day attempted, unsuccessfully, to traverse along the corniced ridge to the other nearby summits in the Lunag massif. This "game" proved highly dangerous and eventually they decided to play safe rather than sorry. After another night on the summit they initiated the descent, down climbing the first section, followed by twenty 60-meter raps (using V-threads only and leaving absolutely no gear in-situ) and a final flurry of down climbing an dodging rock fall once again to reach the safety of their base camp on April 25.

The pyramidal Jobo Rinjang is located just west of Cho Oyu and southwest of Nangpa La Pass. The South Face route is 1700 meters long and encounters difficulties of snow and ice to 75-degrees. We're certain that the stunning new route by Puryear and Gottlieb is destined to spark increased interest in the Lunag massif.