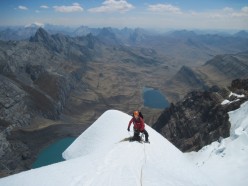 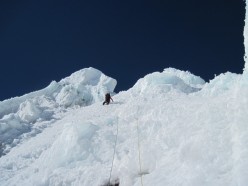 PORTFOLIO / gallery Portfolio: Jirishanca Chico and the Via dei Ragni climb in Peru

Jirishanca Chico and the Via dei Ragni climb in Peru

The trailer about the new Via dei Ragni (D+, 400m) climb up Jirishanca Chico in Peru, established by Silvano Arrigoni and Lorenzo Festorazzi on 08/08/2015.

Last summer the two Ragni di Lecco alpinists Silvano Arrigoni and Lorenzo Festorazzi travelled to Peru with Jirishanca in mind, to add a another line to the one, established in 1969 on the mountain’s west face by the Ragni Riccardo Cassin, Natale Airoldi, Gigi Alippi, Casimiro Ferrari, Giuseppe Lafranconi, Sandro Liati and Annibale Zucchi.

Conditions however were poor and Arrigoni and Festorazzi opted for a different route on the adjacent Jirishanca Chico (5446m) where, on 8 August, they climbed "7 pitches, circa 400m in length with D+ overall difficulties, obviously on snow and ice."

The new line finishes on the ridge as prohibitively dangerous conditions stopped the two from reaching the summit. Arrigoni explained: "The summit ridge was problematic to say the least due to little ice. When we reached the ridge we were unsure about whether to continue or not, but just as we got started an avalanche convinced us to head down… Overall its a fairly easy route (apart from 3 overhanging meters) and extremely fun."