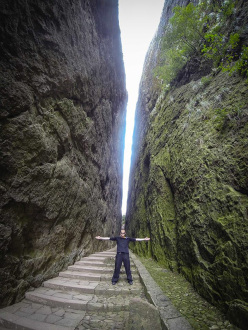 Jeb Corliss and the crack on Mount Jianglang in China.
Photo by Jeb Corliss

One of the most famous BASE jumpers in the world, America's Jeb Corliss, is up to his old tricks: yesterday afternoon he donned his wingusit and flew between two rock faces on Mount Jianglang for what he described as "without a doubt the most technically demanding jump of my life from exit to flying through the crack to opening to landing I have never been happier!"

After a nerve-wracking wait for a break in the bad weather, on Saturday afteroon the 37-year-oldjumped out of a helicopter and then the flew through the "crack", three football fields long and only 20m wide at the top and 5m at the bottom. What is more, the fissure is slightly crooked and the landing was anything but easy... Named "The flying dagger", this stunt is understandably making headline news worldwide.