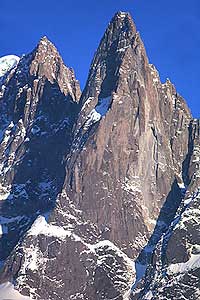 The magnificent West Faces of the Drus
Photo by Philippe Poulet 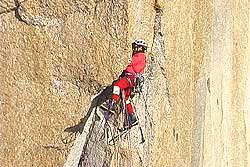 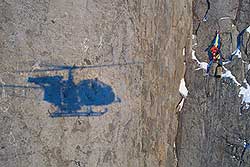 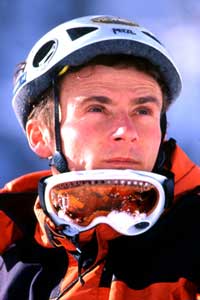 Interview with Jean-Christophe Lafaille after his solo ascent of the West Face of the Drus, Mont Blanc

In a nine-day stretch from 12 to 21 February the Frenchman Jean-Christophe Lafaille opened a new aid route on the West Face of the Drus. This line represents the culmination of a project which the eclectic alpinist had initiated together with his companion Jérôme Arpin in 2000, transferring the difficulties of the hardest Californian big walls to the Alps.

Jean-Christophe believes the resulting A4/A5 to be the hardest (and most beautiful) line he has ever climbed in the Alps. Ten times harder than "Divine Providence" on Mont Blanc’s Grand Pilier d'Angle (of which he made the first solo ascent in 1990). With experience like his - 20 years climbing in the Alps, on El Capitan and the 8000m Himalayan peaks – this grade can should certainly not be taken lightly.
So : solo, in winter, via a new and difficult line, up one of the most beautiful and mythical faces and walls on Mont Blanc and in the Alps… these are all ‘classic’ ingredients, which together form a fascinating and explosive mix, for cutting edge alpinism, for re-search of the absolute limit.

But if alpinism isn’t the only way to feel and live the mountains, if alpinism can be viewed as a complex ‘game’ in which projects and ‘visions’ mix – according to innumerable recipes – with sentiments, fears and risks, then this is reason enough to try to understand what there is other than raw ‘achievement’.

It is with this in mind that in the interview with Jean-Christophe we would like to draw attention above all to his intense love for the mountains. A passion for alpinism that expresses itself in his desire to immerse himself in the ‘totality’, physical and (above all) mental and interior, that the ascents demand of him.

The choice of this route…
chose this style because I like long artificial routes such as those in the USA (Zodiac, Zenyatta, Sea of Dreams,etc...) and I wanted to transfer these difficulties to one of the faces in the Alps.

Why in winter?
To find the hardest and most ‘engaging’ conditions. Using this approach I opened "Decalage" (A4,M7) in an eight-day push on the North Face of the Grandes Jorasses, on the Eperon Croz. The West Face of the Drus is more difficult and requires long technical rock climbing, although it has to be said that the choice of climbing the Drus in winter was influenced by another factor: safety. I think the first section (10/12 pitches) is more dangerous in summer due to rock falls... I like the conditions that you find in winter, everything is more difficult, harder; it's my spirit.

And solo?
I like to climb alone, that’s for sure! I had originally started this project in winter 2000 together with a friend of mine, Jerome Arpin, but we were forced to turn back due to bad weather. The circumstances this year are the real reason why I climbed alone – I couldn‘t find a partner.

What does this ascent mean to you?
I’ve been living in the Chamonix valley for about three years now and I see this incredible and very beautiful West Face all the time! I wanted to open a difficult route on this face because I like to climb, I like this mountain and I like the most difficult conditions. I'm a very satisfied and happy alpinist today because I found everything I like in this line; it's the most beautiful and hardest route I’ve ever climbed in the Alps!

How do you define your style of alpinism?
My style of alpinism is above all marked by my love for all its aspects: rock climbing, ice climbing and dry tooling, aid climbing, alpine north faces, high altitude ascents in the Himalayas, everything... I like hard routes, hard climbing, solos, difficult physical conditions…

But the most important thing is the mental aspect; all hard routes require hard concentration, motivation, and they therefore develop the ‘spirit’. I like the mountain ‘spirit’. In the Alps I like climbing the hardest routes alone and I enjoy staying on a face for a long time. In the Himalayas I like the big faces and the most demanding conditions that one finds on a solo climb. The Himalayas represent my alpinism. Everything is difficult there and the physically demanding nature of an ascent is ever present. Alpinism in its largest sense is climbing on the giant Himalayan faces, at altitude…

The best routes…
It's difficult to summarise my climbing career...there are some nice moments though such as my solo ascent of Privilege du serpent (7c+) in ‘89, Divine Providence solo in ’90, Decalage and now the Drus in 2001. In the Himalayas I remember my attempt of the South Face of Annapurna with Pierre Beghin - unsuccessful, but getting back was extremely difficult; then there’s my fast solo of Gasherbrum II and GI in ‘96…

In 2000 you soloed a new line on Manaslu; what about the future…
I’ve now climbed six 8000m peaks, four of which solo and sometimes via a new route (Shishapangma N Face in ‘94, GI NE Face in 96). In the future I want to climb all the 8000m peaks and if possible alone, along a difficult route, linking two peaks or in winter... This summer for example I’m going to Pakistan to climb K2 alone and Broad Peak.

Curriculum
Jean-Christophe Lafaille was born on 31 March 1965 in Gap, France. He is a Mountain Guide, instructor at the Ecole Nationale du Ski et de l’Alpinisme (E.N.S.A.), and technical consultant for various companies.

Main ascents
1990 First solo ascent of "Divine Providence" on the Grand Pilier d’Angle of Mont Blanc, the hardest and most demanding route on the entire Mont Blanc massif.
1991 Two extreme first ascents solo on the Italian side of Mont Blanc. (Awarded with the Cristal d’Or by the Fédération Française de la Montagne et de l’Escalade for the most significant ascent of the year).
1992 First ascent, in winter, of "Le Chemin des Etoiles" on the North Face of the Grandes Jorasses.
1992 With Pierre Beghin he attempts the South Face of Annapurna 8091m. It is a painful experience, for he retruns home alone…
1993 Ascent of his first 8000m peak, Cho-Oyu (8206m), via the route "Polonaise".
1994 Solo ascent along a new route on the North Face of Shishapangma (8046m). Awarded once again with the Cristal d’Or by the F.F.M.E for the most significant ascent of the year.
1995 In April he sets out on his "Grand Voyage". Jean-Christophe solos in complete autonomy 10 of the most famous peaks in the Oberland, Valais and Mont Blanc (includeing the famous Eiger - Matterhorn - Grandes Jorasses trilogy). In total he travels 140 km using skis and completes a height difference of 20000m in fifteen days. He receives the Super Borne I.G.N. de l’Aventure award for this enterprise.
1996 Solo linked ascent in less than four days of Gasherbrum II (8035m) and Gasherbrum I (8068m).
1996 First ascent solo of an unclimbed 6250m peak which he calls "Mari Ri" after his daughter Marie.
1997 Ascent of West Face of Lhotse (8516m)
1998 Ascent of Aconcagua (6959m), the highest mountain on the American continent.
1999 In April he makes the first ascent of "Décalage" on the North Face of the Sperone Croz (Grandes Jorasses – Mont Blanc.) Solo and in complete autonomy.
2000 First solo ascent of the North Face of Manaslu 8163m. He reaches the summit on 5 May, his 6th 8000m peak.
2001 First ascent, solo and in winter, of the hardest route in the Alps on the West Face of the Drus in a 9 day push.

Sunday 18 February
- 2 pitches A4 + and A2 to 3430m, to the exit of the spur between the Mailly corner and the famous 90m "Diretta Americana"corner
- establish bivouac at 3400m
- helicopter supplies: fruit and fresh bread, but above all a new telephone.
Monday 19 February
The weather forcast predicts strong northerly winds … Jean-Christophe decides to exit quickly and, climbing as quickly as possible, abandons a large part of his gear. He manages to reach the North Face at the height of the 'Allain corner, but fails to reach the l'épaule du Drus ' and is forced to bivouac at 3600m on the North Face...

Tuesday 20 February
Jean-Christophe endures a terrible night wrapped in the porterledge flysheet. Gusts of wind reach 100 km/h and the temperature drops to - 30°C. At dawn it is too cold to climb so he is forced to wait until the temperature rises slightly. Fighting against the wind he reaches the l'épaule du Drus. The South Face is windstill and 20°C warmer. He abseils to the base of the normal route and reaches the refuge Charpoua at 21.00, where he is met by his friends David Autheman and Bertrand Delapierre.

Wednesday 21 February
At 5.00 a.m. Jean-Christophe leaves the refuge and, with the help of David and Bertrand, returns to Chamonix at 10.00 a.m.