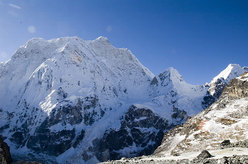 On 21/10/2007 Valeri Babanov and Sergey Kofanov carried out an outstanding ascent of the unclimbed west ridge of Jannu (7710m) in pure alpine style.

These are the details of the great ascent: 43 year old Valeri Babanov and 29 year old Sergey Kofanov established base camp at 4700m on 30/09/2007 and they immediately chose their ascent route: a line up the west ridge which had been attempted unsuccessfully by two French expeditions in 1995 and 1998. On 07/10/2007 the two Russians completed their acclimatisation phase by summiting nearby Pik Merra (6334m).

At 10.00 the next day they left their refuge and, taking just the bare essentials to climb light (read tent and gas only!) they ascended to 7600m, where they spent a cold night in the tent without the comfort of their sleeping bags. At 6.00am they set off for the summit, which they reached three hours later. Latest reports have the two climbers in their tents on the West shoulder, but more details should be coming through soon.

Valeri, who described the North Face as "a miracle, but not horrible" is one of the few mountaineers in the world to have received the Piolet d'Or for his ascents (solo ascent of Meru Peak (6310m) in 2001 and the ascent of Nuptse East (7804m) in 2003). We're certain we'll be hearing more, much more about this inspirational ascent in the future.