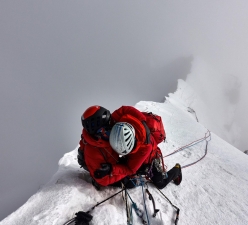 British mountaineers Malcolm Bass, Paul Figg and Guy Buckingham have made the first ascent of Janhukot (6805m) in the Garhwal Himalaya in India.

British mountaineers Malcolm Bass, Paul Figg and Guy Buckingham have made the first ascent of Janhukot (6805m) a remote, hitherto unclimbed peak beyond the well-known mountain Shivling (6543m), at the end of the long Gangotri glacier in the Indian Garhwal Himalaya.

After spending two days approaching the base of the mountain and reaching their advanced base camp, the trio spent 4 days climbing a technical route up the SW buttress that led to the elegant and complex south ridge. They reached the summit at about 17:00 on 6 June and returned to their high camp at 6500m, before descending to ABC the next day via the East Face and negotiating the final 18 km back across the glacier to return to basecamp on 7 June.

Janhukot, also referred to as Jannuhut and Jankut, has attracted challenges from as far back as the 1980s when it seems to have been attempted by an Indian team from West Bengal; details are scant. In 2002 it was tried by an Austrian team; heavy snowfall prevented much progress. Malcolm Bass and Paul Figg made their 1st attempt in 2004 along with Andy Brown reaching 6000m on the SW buttress. Pat Deavoll and Marty Beare from New Zealand on the same expedition reached 6400m via the main couloir on the west face. A group of American and Indian climbers led by Bryan Hylenski and Anindya Mukherjee then made attempts in 2010 and 2011 from the east side. Malcolm returned for his 2nd attempt in 2014 with Simon Yearsley, making the best effort to date via the south west buttress to reach a high point of 6640m amongst hard mixed climbing high on the crest of the south ridge, an area they dubbed "The Castle". Strong cold winds forced them to retreat after 14 hoursof climbing on their hoped for summit day, and Malcolm Bass suffered some frostbite to his hands during their descent to their bivouac. In 2016 Hylenski was back, but found the mountain in exceptionally dry and dangerous post monsoon conditions which turned him and his partner back on the west face couloir. In May 2018, the current team arrived in the Garhwal intent on using similar tactics to those that had so nearly worked on the 2014 attempt. Paul Figg provides the report:

2018 BRITISH JANHUKOT (6805m) EXPEDITION
The trip started with a 3 day acclimatisation climb to 5600m on Kedar Dome just behind base camp. Then on the 1st June the three of us, along with our liaison officer, UK photographer Hamish Frost, and a HAP to support the filmmaking, set off up the Gangotri glacier, taking 2 days to cover the 18km to foot of the south west buttress due to the awkward nature of the terrain. With ABC established there was just enough time to scout out the proposed line before the final kit pack and a few hours anxious sleep. We set off around 0030 the following morning; nervous, silent and moving at what felt like a snail’s pace towards the bergschrund that we crossed to get onto the SW buttress. Relieved that the climbing had begun we soloed up the Scottish grade II/III ramp line each in our own thoughts, spindrift hissing down in the head torch beams. With the coming of dawn, we found that we had made good progress and were close to the sanctuary of our planned bivouac spot at 5900m, a gain of 800 vertical metres. So far, the climbing had been easy, but consequential, so we were glad to tie in and let down our guard a little at the overhung bivouac ledge.

The next morning after a good rest squeezed into our tiny 3 man tent we were about to set off when Malcolm decided his pack was just too heavy and dropped some of his personal kit down the face; glasses, sunglasses, contact lens solution, Ipod, first aid drugs; nothing vital, but just enough to make life a little less pleasant and to add to his kit dropping reputation.

The first roped pitch led off from the ledge, hard ice buried under a covering of snow. As the altitude increased so did the fatigue in the legs as we swapped leads, all glad we were only using 50m ropes. By the end of the 2nd day we had only managed another 300m of ascent and persuaded ourselves to stop for the night on an overly narrow ledge that we tried unsuccessfully to widen on the outside with rocks. Sadly, this didn’t work. Guy had the unfortunate "pleasure" of sleeping on this bed of nails. Paul consolidated his snoring reputation, and Malcolm discovered that his ear plugs had been amongst the fallen.

We had initially hoped to reach the summit on day 3, but it was obvious that wasn’t going to happen today. But we were making upward progress and working well as a team, Malcolm cooking, Guy looking after bivouac rope work, and Paul picking up anything else. More pitches eventually lead to top of the buttress and onto the south ridge at c6300m. After three pitches along this, clouds rolled in and thunder and lightning approached. We were faced with the option of either digging into the exposed and unprotected ridge, or carrying on along a 300m horizontal knife edge in the hope of safety at a dimly seen rock tower beyond. We went for it. To our great relief, 30m below the rock tower there was large snow bowl, a safe haven where we could take off our harnesses and strew gear around. 6500m, 300m to go. As we slurped soup and dehydrated stodge we felt almost confident.

0500 on what we hoped was summit day and we encountered uncommon weather for these heights; light but wet snow that intermittently turned to rain. Much discussion. Departure delayed. More discussion. At 0700 we decided it was just like Scotland, so felt better, made a coffee, ate a cereal bar and set off into the fog. From here our planned route deviated from Malcolm and Simon’s 2014 attempt in that we were hoping to traverse below The Castle, then climb a gully that re-joined the south ridge beyond . After trying to confirm exactly where we were amongst the buttresses on the huge foggy face from a long range shot on Guy’s camera we agreed on a feature we thought would lead to the ridge. Luckily, it did and now all that separated us from the summit was 400m of knife-edged ridge: even if it was corniced and unprotectable, at least the top was in sight. Midway along the ridge Malcolm had probably the scariest moment on the trip partly falling through the cornice to look 1.5km down the East face (somehow managing to record a selfie video moments after to talk about his ‘near miss’). With the summit nearing, snow and ice conditions improved and Malcolm took the lead for what might be the final pitch whilst Guy and I looked hopefully upwards. All became obvious a little while later as Malcolm started waving his arms in delight as he sat at the top of Janhukot on his 3rd attempt. Not long later it was emotional hugs all round as Guy, Malcolm and I sat together as a team on the summit at around 1700.

The top is however only half way and we still needed to get back down. It was here that Guy’s foresight and skills as an instructor came into play, plus the advantage of climbing as a 3. Whilst Malcolm and I had been climbing or belaying, Guy had been rigging v threads making for a swift and efficient abseil descent back to the snow bowl. Despite Paul suffering a small, but unnerving, fall into the snow bowl bergschrund we made it back through the darkness with just enough vigour left to melt enough snow to eat and drink properly.

Day 5 and it was just the matter of reversing the knife edge ridge to our planned descent down the east side of the mountain. This was the same descent used by Malcolm and Simon Yearsley in 2014 and this knowledge relieved a bit of mental pressure. After more efficient Guy led abseils, then a long down climb, we reached the high glacial bowl, weaved our way down between its crevasses in baking sun to re-join the Gangotri glacier, and eventually stagger back into a deserted ABC 5 days after we had left. We celebrated with another dehydrated meal and an early night.

All that remained now was the long walk 18km back down the melting glacier to base camp. We were however delighted to be met part way back by a rescue team from BC with roti, potatoes, and chocolate ; fresh food tasted delicious after 7 days of energy gels and dehydrated food and it was a joy to feel our little team of three merge back into the wider world.

The climbers would like to thank their sponsors and supporters without whom such trips would not be possible: