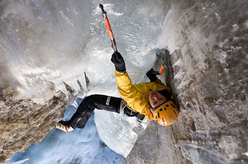 Ines Papert from Germany has made the first female ascent of "The Flying Circus" on the Breitwangfluh, Bernese Oberland, Switzerland

Ines Papert from Germany has made an impressive on-sight ascent of "The Flying Circus" M10, one of the world's most famous mixed routes first ascended by none other than Robert Jasper in 1998 on the Breitwangfluh in Switzerland's Bernese Oberland.

After having been tipped off about ideal conditions Papert teamed with Thomas Senf and roped up a decade to the day after Jasper's historical ascent. Climbing in perfect blue skies and -5°C Papert powered through the four pitches which "command respect". Papert continues: "not only leading the route but also seconding is extremely demanding since it's a long traverse line and both climbers need to be really experienced."

After having dominated the competition and drytooling scene, the four-times Ice Climbing World Champion has recently been channeling her energies into top-end ascents on some of the Alps' most impressive faces. These include the hardest female drytoling redpoint, "Law and Order" M13 at the Diebsöfen in Austria, and the first female repeat of "Camillotto Pellesier" 8b on the North Face of Cima Grande, Dolomites.