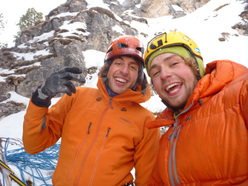 Illuminati repeated by Boswell and Fritzer

During a brief raid in the Italian Dolomites Greg Boswell and Charly Fritzer both repeated Illuminati, the beautiful mixed climb established by Albert Leichtfried in 2006 and recently in the headlines with the first female ascent at the hands of Ines Papert and Lisi Steurer.

Scottish climber Boswell repeated these 165m graded M11+ WI6+ on Monday 13 February, while his Austrian partner repeated the line the next day. "The conditions where perfect" Boswell explained to planetmountain "the ice was super easy and so featured that we just hooked our way up it in the afternoon just after the sun had gone out of sight behind the neighbouring mountains. I got the first two pitches second go and the rest onsight. Charly onsighted it all apart from one slip off the second pitch when a hold broke on him while he was cruising through the roof."