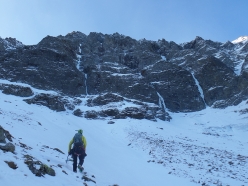 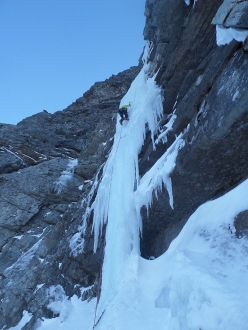 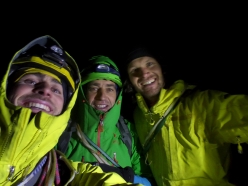 Vittorio Messini, Isidor Poppeller and Matthias Wurzer on the summit of Hochbirghöhe after having made the first ascent of 'Mehr denn je Hintersee' (800m, M7+ WI6+, 08/12/2016), High Tauern, Austria
Photo by Vittorio Messini

The report by Vittorio Messini who together with Isidor Poppeller and Matthias Wurzer made the first ascent of 'Mehr denn je Hintersee' (800m, M7+ WI6+ 08/12/2016), a new ice and mixed climb up the NE Face of Hochbirghöhe (2767m), High Tauern, Austria.

The Amertal, the valley that leads to Felbertauerntunnel, is often wrongly referred to as the Felbertal. The "real" Felbertal valley starts at the so-called "Wolframkehre", where the Wolframwerk is located, and leads SSW towards the Hintersee lake and then on to the St. Pöltenener hut.

The Felbertal is blessed with lots of water and many steep rock faces, but in the summer these are too grassy and brittle to be of interest for rock climbers. Since the road is closed in winter from Wolframkehre, and since only the workers are authorized to proceed past the barrier, the valley remained dormant for years. A few ice climbers made their way in the first icefalls, but hardly any one ventured further into the 5km valley. Siegfried Berger and his climbing partners were responsible for early development at the start of the new millennium, but the real flurry of new routes were climbed in 2013 when five independent grade VI ice climbs were put up in the ‘Hexenkessel’ , the 180m high amphitheater.

Except for an attempt by Isidor Poppeller and myself in 2013, the Hochbirghöhe remained virtually untouched. Finding the right conditions up there isn’t easy: the mountain is just too close to the main alpine massifs and is therefore exposed to the brunt of the weather. As soon as it snows the area becomes threatened by avalanches, while when the wind blows spindrift continuously streams down the mountain face.

Last year, the Tyrolean alpinist Mario Walder and Swiss alpinist Dani Arnold finally made the first ascent of the face by climbing he most logical and fattest ice streak. The route name Tauernwind obviously recalls the fickle conditions that usually rule this mountain.

This year Isidor Poppeller, Matthias Wurzer and I were at it again. The road could be cycled on which meant that we quickly reached Hintersee. Practically no snow and zero wind almost removed all objective dangers, so conditions were ideal for an attempt.

After a 200m WI4 icefall, we trudged across snow slope that led to the line we had in mind. This offered everything you could wish for: a Chamonix-like gully, followed by an icy slab and a fragile drip, as well as a mixed pitch, some classical alpine terrain capped by some icy steps. When we finally reached the summit in the dark we were overjoyed to have had such a great adventure on such a cool line in our backyard mountains! We were careful as we abseiled off and then enjoyed a celebratory pizza in the Gasthaus late that night!