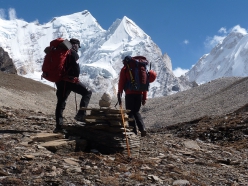 Himlung in Nepal, mountaineering off the beaten track

The report by Italian alpinist Riccardo Bergamini who on 23 October 2015 ascended Himlung 7126m, a remote mountain situated on the border between Nepal and Tibet.

In October 2015 three Italian mountaineers, Riccardo Bergamini, Luca Montanari and Giorgio Sartori organised a climbing expedition to Himlung, a beautiful 7126m mountain in the Peri Himal district. The summit is split between Nepal and Tibet and the decision to climb there stemmed from the fact that they wished to climb in an area that has only recently been opened to mountaineering, with an approach that followed a route far removed from the popular trekking circuits, in search of the pioneering spirt of the early mountaineering expeditions. The trek lived up to their expectations and they discovered a remote and beautiful area, marked by a sense for adventure where they shared the every-day life of the local population.

The area is beautiful, far removed from popular treks such as the Everest, Annapurna and Manaslu treks. The walk starts in an almost tropical climate, lush, warm with banana trees. It gains height slowly, and at about 3000 / 3500m the views change, similar to the Italian Dolomites, the only difference being that the faces are twice, if not three times as high! The environment at this point is typically alpine, with beautiful views onto the mountains and huge glaciers. The trekking has only recently been opened to westerners and there are only a handful of lodges similar to those in the more famous valleys. We spent the nights in private homes, inhabited by families of Tibetan origin, sleeping in spartan rooms. Of course, along the trek we met very few people indeed, both tourists and the local population, and you can walk for hours on end without meeting anyone.

I climbed Himlung via the normal classic route, if this is how it can be described, sticking close to the ridge to the left of the face. The summit push was pretty tough, because we started from camp 2 (6100m), and took an alternative route, losing some altitude and then fixing some ropes on a 50-60° slope. From Camp 2 to the summit, calculating the height we lost, was about 1,500 meters in altitude. I reached the summit on 28 October with Mingma Sherpa. The descent was complicated because the weather changed rapidly and for about 4 - 5 hours we had to battle against very strong gusts of wind, hail and snow. When we reached Camp 2, at 19.30, there was at least 30 cm of fresh snow.

On the whole the expedition really left a mark, in particular the fact that we met so few people, both during the trek and at base camp. I’ve been to Nepal several times in the past, on four previous expeditions, but this was the most family-like, both with the staff at base camp and with the other three members of the expedition. I’d already climbed above 7000 and 8000 meters, in 2013 I climbed Cho Oyu and in 2012 Pik Lenin, but this valley and little-known mountain took me back to a type of mountaineering I experienced at least 10-15 years ago.