► News ► Alpinism ► Has the Yeti returned? 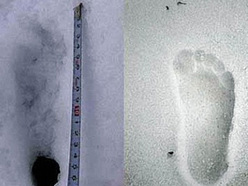 A photo taken by the Japanese expedition. On the left the presumed Yeti footprint, compared to a human footprint on the right.
Photo by www.everest.co.jp/yeti2008

Has the Yeti returned?

A Japanese expedition claims to have photographed footprints of the Yeti on Dhaulagiri IV.

And what if Messner was right after all? News from the Himalaya hit like a bombshell this morning : a group of Japanese mountaineers claims to have photographed the footprints of the legendary Yeti, whose existence has been debated for decades.

Kuniaki Yagihara recounts that the seven man "Yeti Project Japan" team  spent 42 days on the slopes of Dhaulagiri, Nepal, in what is their third trip to the Yagihara region in search of the abominable snowman.

According to sources the expedition managed to take numerous photos of alleged footprints at circa 4400m altitude. Yagihara claims to have made out a brown silhouette through his binoculars, but he is uncertain as to whether this was the Yeti due to the fact that he was almost 1 km away.