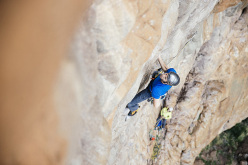 Hansjörg Auer and Much Mayr making the first ascent of Le Petit Prince (8a, 400m), a new multi-pitch climb up the West Face of Capu Cascioni in Corsica.
Photo by © Elias Holzknecht

Hansjörg Auer and Much Mayr making the first ascent of Le Petit Prince (8a, 400m), a new multi-pitch climb up the West Face of Capu Cascioni in Corsica.
Photo by © Elias Holzknecht

Austrian climbers Hansjörg Auer and Much Mayr have made the first ascent of Le Petit Prince (8a, 400m) up the West Face of Capu Cascioni in Corsica

Acting on a tip-off from Corsica expect Arnaud Petit, last autumn Austrian climbers Hansjörg Auer and Much Mayr explored the NW corner of the Mediterranean island for their first time in search of rough, untouched granite. After three days of wandering through the scrub and woodlands they set their sights on Capu Cascioni, the 1091m high peak close to Porto that hosts routes such as Petit’s 2014 creation Le non-sens et la joie.

Auer and Mayr are a well-oiled pair, having climbed new routes together from Marmolada in the Dolomites all the way to Patagonia’s Paine Tower. They started up a line on the 400m high West Face of Capu Cascioni, to the right of Le non-sens et la joie, and after having climbed ground-up for 3 days they were forced to return home without having completed the route.

Auer and Mayr returned this March to conclude unfinished business and, in-between dodging the raindrops, they spent one day completing the route, worked it a further two days, and then made the first free ascent last Friday.

The new climb is called Le Petit Prince, breaches difficulties up to 8a and, as Auer is keen to point out, has "just 12 bolts along the 12 pitches, excluding the belays"” The result is a severe, at times run-out test that shouldn’t be underestimated.


25/09/2009 - Corsica rock climbing
A selection of some of the best multi-pitch rock climbs in Corsica, by Maurizio Oviglia. Routes in the Bavella, Val Restonica and Valle du Tavignano.