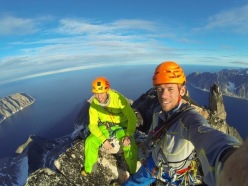 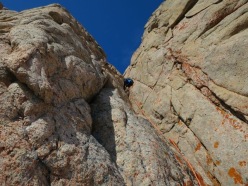 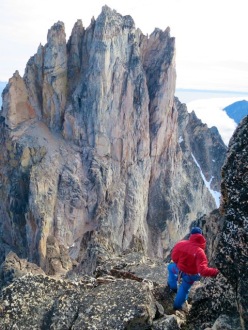 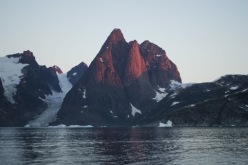 This summer Ralph Villiger and Harald Fichtinger made the first ascent of the Austrian-Swiss-Route up the SW Face of Mount Kirken, NE Greenland.

Last year Switzerland's Ralph Villiger and Austria's Harald Fichtinger explored Greenland’s East coast (between 60°N and 63°N) in a sailing boat and alone. At the time poor rock forced them to abandon their attempt up a peak they dubbed Greenland Dru - because of its striking resemblance to the famous Drus in the Mont Blanc massif - in the Kangerdluluk Mountains, but they consoled themselves with the first ascent of the pleasant 13-pitch Hochzeitsweg (5c) up an unnamed peak in the Umanaq Fjord.

This summer the duo returned to explore Greenland's north eastern coastline once again. After having sailed from Iceland, where the had left the boat for the winter, to Liverpool Land (71°N) slightly north of Scoresby Sound, they then headed towards a Mount Kirken, a peak they had only seen from a picture in a book and which they knew was unclimbed.

The expedition's main difficulties were connected to the mountain's relative inaccessibility and the expedition style approach needed to climb it. Sailing boats enable remote areas such as these to be reached and provide a comfortable base camp, but necessitate an extremely safe anchor bay – in particular in a team of 2, where no crew is left behind to look after the boat while the others head up the mountain. To add to the difficulties, they had to make sure they would still be able to reach the boat in case a polar bear destroyed their dinghy, as had happened to another boat earlier this year in Greenland. Last year Villiger and Fichtinger encountered a polar bear and this is why they climbed with a gun.

The anchor bay was located in the north, from where the approach lead over a glacier and a ridge before leading to foot of the mountain. The peak – dubbed Church Mount by early explorer William Scoresby jr. due to its resemblance to a church – is wrongly positioned on various maps. This is the reason why Villiger and Fichtinger only reached a relatively unspectacular summit on the 14th of August, after having approached what they believed to be Kirken from the back, i.e. from the North. A day later they discovered the right approach and reached the summit after a steep snow gully and a 6-pitch climb of French grade 6b in solid granite. They do believe theirs was the easiest line up the South-West face and have compared the route to great classics in the Mont Blanc massif, but with startlingly different sea panorama.

After the successful ascent, the two returned to Iceland. Villiger then sailed single-handedly back to Northern Scotland in 7 days to round off the expedition.