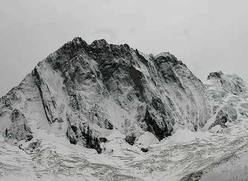 After a 6 day ordeal, the lifeless bodies of French alpinists Olivier Sourzac and Charlotte De Metzi were located this morning on the Grandes Jorasses.

Unfortunately the two alpinists who had been missing on the South Face of the Grandes Jorasses in the Mont Blanc mountain range have failed to make it. The bodies of French Mountain Guide Olivier Sourzac and his client Charlotte De Metz, missing since last Thursday, were located this morning by a French rescue helicopter at 4025m in the Roches Whymper area, 150m beneath the summit and on the normal descent route.

This initial location gave rise to what many had feared after all these days: the bodies appeared immobile and lifeless. The tragic truth was then ascertained by the Italian Mountain Rescue Service which, seeing that this area lies within Italy, confirmed the deaths.

47-year-old Sourzac from Chamonix and 44-year-old De Metz from Fontainebleau had set off last Wednesday to climb the Linceuil route up the N Face of the Grandes Jorasses but the weather worsened significantly, forcing them to bivvy and preventing them from descending. Sourzac immediately called the rescue services but due to the terrible conditions and the high risk of avalanches these were forced to turn back on numerous occasions. Only yesterday did conditions permit safe helicopter flight and this resulted in the sad news of the deaths this morning.