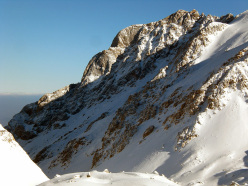 Silhouetted against the sky the three Spalle of Corno Piccolo. The lowest is the third shoulder, this is followed by the second and then the first. The highest point is the summit of Corno Piccolo.
Photo by archivio M. Marcheggiani - L. Trento 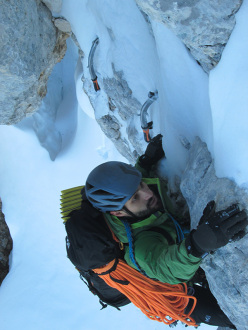 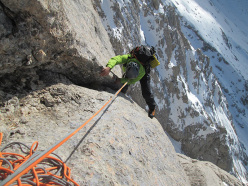 It isn’t winter yet but it’s snowed, Prati di Tivo is open for skiing, the mountain is in typical winter conditions and this suffices to carry out a "winter ascent". At least for me. Lorenzo wishes to do something committing, I suggest the enchainment of the Corno Piccolo’s Tre Spalle, its three shoulders, and before finishing the sentence he replies in his typical manner "great, let’s give it a go!"

At five to five on 7 December, slightly earlier than usual, I reach the parking lot and receive the following sententious SMS: "Max, I’m on the toilet, vomiting; I’m not up to it! "At 6 my bedsheets were cold but warm up in a second.

Exactly 24 hours later we meet. The journey, coffee, chit-chat including "Daniel got married and I got wasted" and in the end we threw our rucksacks onto our shoulders and ascended from Prati, at 1450m, up into Val Maone, past several avalanches, some of which somewhat worrying.

We work hard to reach the base of the third shoulder and then climb this, winter boots on, mixing via Morandi - Consiglio with the shoulder’s historic climb, up solid and clean rock in the sun. The sun is still high in sky but finding a bivy like the one we did, and not stopping there, would have been an insult to anyone who bivouacs out in the mountains.

These are shortest days of the year and our long night begins at 16:45 and finishes in the next morning’s cold, 14 hours later. Countless stars and, as a morning treat, the crescent moon above the summit of Corno Grande.

The long, narrow ridge on the third shoulder leads us to base of the second shoulder; the rock climbs are all clean but we want to use our crampons a bit so, when filled with snow, we head up the simple Bonacossa gully that generously opposes our efforts offering some mixed climbing there’s absolutely no way we’d do unroped. The smooth and slippery rock requires the skill so typical of those who often climb with crampons and, after plenty of shade and cold, we reach the top of the shoulder in the sun.

This is followed by a long traverse across steep snow, with the first shoulder constantly above us. We climb the long Bonacossa chimney and then, on the upper section, follow a demanding variation up clean rock while the biting wind makes up quickly wrap up nice and warm.

On the summit we discard our idea of descending the NE Face as this is covered in snow and a thin layer of ice. So no comfortable abseils, but instead the ascent to the summit of Corno Piccolo and descend down the couloir to the left of this monolith where I locate almost none of the abseil anchors. We solve this problem with our kevlar threads after which the deep, unconsolidated snow leads us back to the base.

Lorenzo has a fever, I feel tired and we don’t miss out on the winter room at the Franchetti hut, nor a warm risotto made using the emergency food supplies.

This mountain is magical, fascinating and I feel she loves me. We’ll descend tomorrow...

Enchainment of the Gran Sasso Corno Piccolo shoulders, as a prelude to winter on 7 and 8 December 2015
Vertical height gain 1,200 meters, max difficulty M3 and 5°/ 5°+ on rock.