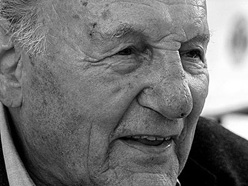 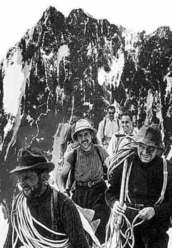 Riccardo Cassin passed away last night at his home in Resinelli at the foot of his beloved Grigna mountain. Cassin was one of the world's all time absolute mountaineering legends. He had celebrated his 100th birthday on 2 January this year.

It's going to be hard to get used to the idea that Riccardo Cassin is no longer with us. It's difficult already, now. Not only because Riccardo had lived his 100 years intensely. And not only because he is an absolute mountaineering legend. But because that man, sculpted in rock and made for the mountains, that "man of stone" as Fosco Maraini defined him, was a reference for all. Riccardo Cassin represented the essence of alpinism, of a man who sets himself objectives and reaches them. And Riccardo managed to do the same in his private life too, not just in the mountains. The very same mountains he loved to define as "my girlfriend."

Cassin represented the prototype of an alpinist and man who always continued in his direction, who knew how to look forward. Riccardo knew how to look beyond obstacles. He was graced with intuition and, above all, he instinctively knew the best way to overcome barriers. He was stubborn. Obstinate even. Difficult, if you want. He was the leader who wanted to climb first, always and regardless of everything else. He was the head of a patriarchal family. But also a man who, in the mountains just like in life itself, knew how to make decisions and take on full responsibility.

Cassin was the man who in 1944, after the 25 of April, chose to fight for the partisans because "the Germans had occupied our land and our houses. What else could I do, other than send them away?" He was the mountaineer who remembered with pride that he had never lost a climbing companion and this goes to show the importance of all those who roped up with him. It is not due to chance therefore that he described his climbing partners as "all great alpinists". And he was the son, husband, father and grandfather who wanted to be an example for all. Perhaps this is why he was loved and respected by all. So much so that he was adopted as brother, father and grandfather by climbers of all ages. For everyone he was simply Riccardo.

It's difficult to think about a "legend", or simply about a mountaineer, who is not connected to his achievements. Or about someone who does not show disinterest in what happens afterwards. In this too, Cassin was special. He welcomed the future with open arms and like all great men he was always curious. Perhaps it is for this reason that he never tired, that he looked to the future, to youngsters, with great interest. This is why he often sided with the new generations, against the mountaineering establishment. He was born in San Vito al Tagliamento in Friuli on 02 January 1909 and as a young man he emigrated to Lecco in search of work and fortune. Perhpas this is why the desire to renew himself was in his DNA. The desire to give credit to the hopes of those who need to create their future with nothing but their own hands. He started out as a blacksmith's apprentice in Lecco and he soon became factory head, then company director. All this happened while he studied at evening classes and, on Sundays, he began to climb at the Grignetta, before widening his range of action first to the Dolomites, then Mont Blanc and then the mountains throughout the rest of the world.

It is difficult to remember the thousands of stories regarding his mountaineering life. Just like it is difficult to remember his more than 2500 ascents and more than 100 first ascents. It is difficult to explain what he represented for the city of Lecco and for alpinism in general, but also for the Ragni di Lecco group of which he is certainly one of the key symbols. What is clear is that what remain are beautiful routes and achievements which left their mark in the history of alpinism and, above all, fuelled the dreams of a myriad of mountaineers. Such as, to name but a handful, the first ascent of the beautiful arête up the Torre Trieste in the Dolomites, carried out in 1935 together with Vittorio Ratti. And that same year with Ratti, Cassin amazed the world by overcoming the incredible overhangs up the North Face of Cima Ovest di Lavaredo. Then there is the 1937 first ascent up the legendary NE Face of Piz Badile, together with Ratti and Gino Esposito. And the mythical first ascent of the Walker Spur on the Grandes Jorasses in 1938, together with Esposito and Ugo Tizzoni.

Then came the expeditions. First of all the missed expedition to K2 for which Cassin, after having taken part in a reccie and the preparations, was unjustly excluded. "I cannot forget..." said Cassin, remembering that episode. Perhaps it was precisely this great delusion which provided him with the means of proving his valour as expedition leader, first with the ascent of K2's magnificent neighbour, Gasherbrum IV (7925m), summited by Bonatti and Mauri in 1958. Then with the great first ascent of the South Face of Mount McKinly in Alaska, during which all six Ragni di Lecco expedition members summited, including Cassin himself. On that occasion Riccardo was congratulated via telegram by the President of the United States of America, John Kennedy. This is like saying that these were things of times past, of when alpinism was still a dream and adventure.

Now that Riccardo is no longer here all of this remains. His personal history, his routes and his achievements will continue to be the dreams of many. Etched forever, just like the memory of a man who never deprived himself of life itself or of the mountains. A man who never spoke too much and, when he did, always spoke clearly: all you needed to do was look him in the eyes to understand. What counted were the facts, for Cassin. But what also counted was the kindness and that quick-witted smile which made his eyes shine when he was happy. This is how I am, they seemed to say. This is how Riccado Cassin always was and always will be. A man and a legend who all alpinists called Riccardo. And who will be sorely missed.