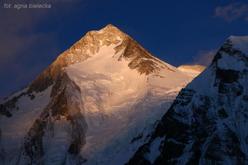 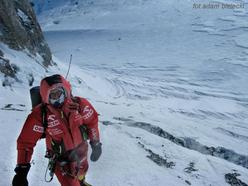 Janusz Golab in the Japanese Couloir; camp 2 in the background.
Photo by Polish Winter Himalaya Climbing 2010-2015 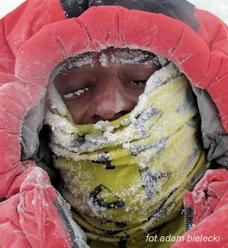 At 08:30 local time on 09/03/2012 the summit of Gasherbrum 1 (Karakorum, Pakistan) was reached for the first time in winter by the Polish mountaineers Adam Bielecki and Janusz Golab. On the same day the alpinists Gerfried Göschl, Nisar Hussain and Cedric Hahlen were seen for the last time on the same mountain.

While the time had finally come last Friday to celebrate the success, truly historic, of the coveted first winter ascent of Gasherbrum I by a Polish expedition led by Artur Hajzer, on the south face of the mountain an international expedition led by Gerfried Göschl launched the alarm that three alpinists – Göschl, the Pakistani high altitude porter Nisar Hussain and Cedric Hahlen from Switzerland – had gone missing. The three had been sighted for the last time midday on Friday circa 250m below the summit and since then there has been no sign of life. At present a desperate rescue effort is underway but due to the terrible weather no helicopter has managed to take off, while the Poles Darek Zaluski and Agnieszka Bielecka are attempting to climb back up to Camp 1. Superfluous to say that these are truly terrible hours...

The Polish team ascended via the Japanese route up the NW Face of GI, using the last chance the mountain gave them and making perfect use of the short weather window – which meant that they set off for the summit push from Camp 3 (7040m) at midnight with temperatures down to 35°C (windchill -53°C). Bielecki and Golab climbed in very difficult conditions and reached the summit at 08.30 - without supplementary oxygen, after having ascended at circa 100m elevation gain/hour and without drinks as their water and Powergels had frozen. They began the descent immediately.

The weather forecast was good only until midday and so, after a brief rest at Camp 3 which they reached at 14.00, they continued their descent along the fixed ropes down the Japanese couloir to reach Camp 2 (6450m) at 17.00, where they were met by expedition leader Hajzer and Shaheen Baign from Pakistan. When they finally reached Base Camp the next day, only their noses and Bielecki's big toe were slightly frostbitten .

The expedition succeeded after 49 days of waiting, work on the mountain and long periods of terrible weather with strong winds and low temperatures. They believed in success until the very end and waited patiently for that weather window. In the 90's together Janusz Golab formed part of "Polish Dream Team" along with Stanislaw Piecuch and Jacek Fluder and his is a fantastic new route up Kedar Dome. Adam Bielecki is a young, 28-year-old climber who ascended Makalu last summer.

The expedition was led by Artur Hajzer who has amassed a great experience at altitude. He started in the 80's during what is defined as The Golden Age of Polish Himalayan Climbing and he carried out the first winter ascent of Annapurna with Jurek Kukuczka in 1987. The recent success is part of Hajzer's project called Polish Winter Himalaya Climbing 2010-2015, whose goal is to make a “come back" of Polish Himalayan climbing tradition which, in many ways, disappeared with the deaths of a great generation of mountaineers such as Kukuczka, Rutkiewicz, Andrzej Heinrich, Andrzej Czok, Tadeusz Piotrowski and many others.

This is the eleventh 8000 peak to be climbed in winter, 9 of which were ascended by Polish mountaineers, including obviously Shisha Pangma by Piotr Morawski and the Italian Simone Moro in 2005.


Gasherbrum I in winter