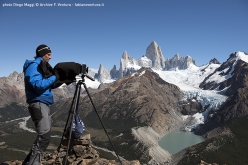 Fitz Roy, Cerro Torre and Patagonia: the glaciers 100 years on

The expedition in Patagonia led by Italian photographer Fabiano Ventura to document the effects of over 100 years of climate change as part of multi-year project "On the trails of the glaciers" has taken photos of Fitz Roy and Cerro Torre and compared them to those taken by Alberto Maria De Agostini.

After the repeat photographs in the Torres del Paine National Park, followed by those in the Los Glaciares - El Calafate National Park, Italian photographer Fabiano Ventura has now focused on Fitz Roy and Cerro Torre, the mountains that have come to symbolize Patagonia. His team is continuing to explore and document the effects that over 100 years of climate change have had on glaciers, and in this particular case he is basing his work on the historical photographs taken by Alberto Maria De Agostini.

To repeat the immense Fitz Roy skyline immortalized in 1945 by De Agostini, Ventura ascended to the summit of Cerro Polo. Ventura explained on his blog "Once below the summit, I began the traditional search for the exact place to take the photo, historic photo in hand, moving around to check the precise position of the various ridges and mountains. After searching around for quite a while I recognized some rocks on the ground that confirmed I was in the right place! I quickly mounted by folding Linhof camera and started taking photographs, as clouds could have rolled in above Fitz Roy at any moment.

By comparing the historical photo with the current situation, it’s clear how the snout of the Blanco glacier has retreated several hundred meters. In the historical photo, in fact, you can see how the glacier terminus occupies at least half the lagoon, while a huge rock face has now appeared. This place is immense, from the photo is difficult to understand the size of these valleys and mountains. To give you an example, the bottom of the valley lies at 600 meters above sea level, while the summit of Fitz Roy is 3405 meters!”

In the ensuing days the team took photos from Loma de las Pizzarras and Mirador Maestri, the panoramic outlook that offers breathtaking views onto Cerro Torre. Ventura concluded: "In just three days I ascended almost 4,000 meters, walked more than 60 km and repeated up to 5 historical photographs taken by De Agostini. It was tough, but really worth it"

18/07/2003 - Trekking in Patagonia
Trekking in a magical and mysterious land: three magnificent walks around the Torres del Paine, Fitz Roy and Cerro Torre, the stone heart of Patagonia.