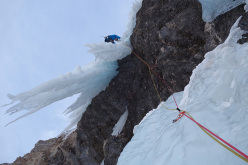 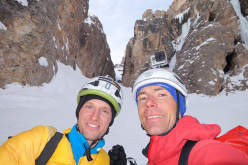 On 15/03/2014 in Vallunga (Dolomites) Wolfgang Hell and Pavol Rajcan made the first ascent of Evoution, a new mixed pitch that caps La Strega, first ascended by Cristoforo Groaz and Giovanni Groaz in 1992). Overall difficulties of the 120m line check in at WI 5+ M9+.

Vallunga in the news once again. After the first ascent of Zweite Geige at the hands of Albert Leichtfried and Benedikt Purner at the end of January, the small Dolomite valley above Val Gardena is in the limelight again thanks to Evolution, a roof immediately to the left of the famous La Piovra.

The first two pitches climb 60m of relatively easy ice and are called La Strega, first ascended on 5 January 1992 by the brothers Cristoforo and Giovanni Groaz. On 15 March 2014 local climbers Wolfgang Hell and Pavol Rajcan climbed the 10m of rock above to breach the steep roof. They placed three pegs to climb past difficulties estimated at M9+ and reach the curtain, from where a final pitch leads right to reach the abseil piste of La Piovra.

"We're really happy to have completed and redpointed this route" Hell told Planetmountain, adding "we reckon it's really beautiful and offers some difficult mixed climbing. Something for experts, that's why we've called it Evolution."