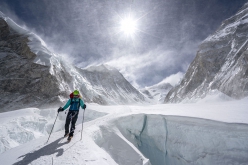 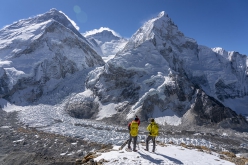 Looking across onto Everest, Lhotse and Nuptse
Photo by Jon Griffith 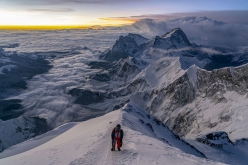 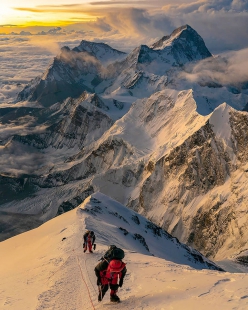 The trailer of Everest VR, the film by British mountaineer Jon Griffith that documents an attempt by Sherpa Tenji to climb Mt Everest without supplementary oxygen.

On 30 April 2017 world famous Swiss alpinist Ueli Steck perished on Mt. Nuptse whilst acclimatising for one of the most ambitious mountaineering projects in the Himalaya: climbing both Mt. Everest and Mt. Lhotse without the use of supplementary oxygen.

Steck had planned to carry out this undertaking with his climbing partner Tenji Sherpa. As previously reported, in April 2018 the Nepali mountaineer returned to the highest mountain in the world finish off the project with Steck's close friend, British mountaineer and award winning camerman Jon Griffith.

Although the coveted link-up was not completed, having taken a gamble with the weather and waited until late in the season, the team was rewarded with "the rare opportunity of being completely alone on this otherwise heavily crowded mountain." The 8K 3D Virtual Reality footage is quite simply unique. To find out more about where and how to see the film, check out ww.everestvirtualreality.com