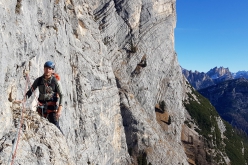 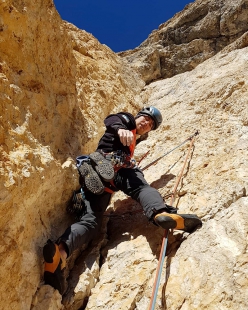 They located some of his belongings… saw the signs of an avalanche. And then no other trace. The onset of darkness stopped the rescuers from continuing their search, which would have been too risky. Yesterday Etienne had set off ski mountaineering to Torrione Roma on Mount Pordoi in the Dolomites. To those mountains he knew so well and which he loved so much. He will never return. No one will ever comprehend, or put into words, the pain felt by his parents and brother, his girlfriend and of all those who knew him, all those who he’d tied into the same rope.

Etienne Bernard was 27 years old. He was a mountain guide and ski instructor, a climber and a extremely good ski mountaineer. Born in Campitello di Fassa on 23 October 1993, he literally learned to walk by climbing and skiing with his mother Petra and his father Renato, one of the mountain guides and one of the most famous alpinists in Val di Fassa. It is no coincidence that after attending the Mountain High School at Tione, aged 19 he qualified as a ski instructor, while at 21 he already became a mountain guide. The speed with which he accomplished this was remarkable and displayed great aptitude, skill and passion. Saying that the mountains were his life wasn’t simply a slogan. For Etienne, the mountains, climbing and skiing represented pure joy. They were his world. They were the air he breathed, allowing him to be who he was.

Just look at his climbing photos. His ski mountaineering videos. His huge grin, to understand the power and the enthusiasm that drove him. An enthusiasm though that did not come at the expense of seriousness. " I realise I've been quick" he wrote speaking of his climbing in the mountains "this fills me with pride, nevertheless I know one never ceases to learn and each day out in the mountains I try to gain that little bit more of knowledge." Etienne lived for the mountains and there was no other place he could have been. A warm embrace to all his loved ones.