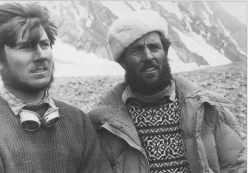 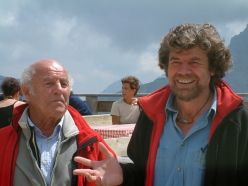 South Tyrolean mountaineer Erich Abram passed away on Monday 16 January 2017 at Bozen aged 95. The talented mountaineer and climber played an important role in the 1954 Italian expedition that made the first ascent of K2.

Erich Abram passed away yesterday and, with him, the last climber of the historical Italian expedition that made the first ascent of K2 in 1954. Just over 20 days ago Ugo Angelino, another member of that historic expedition, died, too. Born in 1922 in Sterzing, South Tyrol, Abram died on Monday aged 95 having led an intense and adventurous life. His love for climbing and mountaineering began at an early age, and as a youngster he quickly distinguished himself as one of the most accomplished grade VI climbers of his generation. It comes as no surprise that his most famous first ascents are in the nearby Dolomites. These include the famous Abram - Führe up the SE Face of Piz Ciavazes in the Sella group, as well as routes up the West Face of Sass Pordoi and up the North Face of Cima Grande di Lavaredo.

Abram however is known above all for the fundamental role he played in the famous 1954 expedition to K2. Apart from having been one of the most active during the initial phases of the climb, preparing both camps and the route, it was Abram who gave Walter Bonatti and hunza Amir Mahdi a fundamental hand in transporting the oxygen bottles above Camp VIII. The next day these enabled Lino Lacedelli and Achille Compagnoni to climb to the summit. On that Friday 30 July 1954 Abram stopped, absolutely exhausted and completely spent, at 8000m, leaving his two climbing partners with the task of breaching those final 100m to reach the agreed meeting point with Compagnoni and Lacedelli, who had preceded them. Before descending to Camp VIII Abram and his two partners had been in voice contact with the other two leaders. In short, there was no way of knowing how events would then unfold: the two groups failed to meet, and Bonatti's and Mahdi’s endured a terrible bivouac out in the open at 8100m. This episode narrowly, miraculously missed transformed into tragedy and proved highly controversial in the years that followed. In the official reconstruction of the turn of events Abram was on the main witnesses also because, thanks to his specialization in refrigeration, he had also been responsible for the oxygen bottles.

But K2 aside, Erich Abram’s life proved to be truly intense and special. It is recounted in the book “Erich Abram, un alpinista bolzanino - an alpinist from Bolzano” written by Augusto Golin which, with previously unpublished material, recounts the thousands of adventures of the South Tyrolean: from the war in Russia to becoming a prisoner of war, his climbs in the Dolomites, his first flights and rescues as a pilot, his love for exploration and climbing mountains. Yes, Erich Abram was the last mountaineer of that legendary K2 of the Italians, but he was also a protagonist and player of an era that no longer exits.