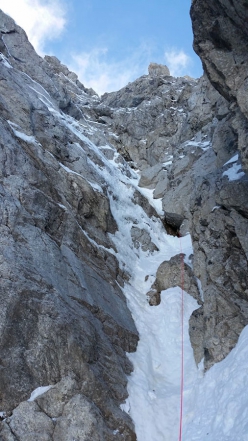 Enrico Sasso making the first ascent, solo, of Rose up the North Face of Marguareis on 11/12/2018
Photo by Enrico Sasso 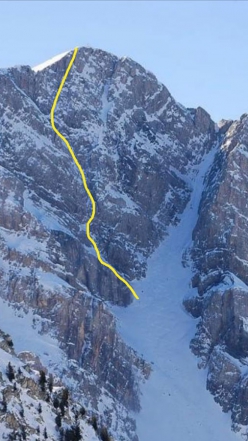 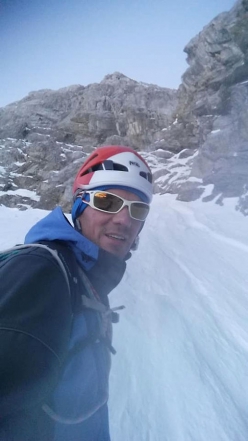 Enrico Sasso reports about his 11 December 2018 solo first ascent of Rose (ED, 380m, WI4, M7) a new mixed route up the north face of Marguareis in the Ligurian Alps, Italy.

Climbing on his own on Tuesday, 11 December 2018, Enrico Sasso made the first ascent of Rose, a challenging mixed climb up the north face of Marguareis in the Ligurian Alps. The 34-year-old Italian mountaineer described the line as "beautiful, logical and difficult". The route was repeated by Luca Avagnina, Simone Greci and Enrico Oberto, and shortly afterwards by Rossano Libera and Sabina Bottà, and by Livio Belliardo and Tommaso Cavagnero. According Libera "the ambient is magical, total isolation in an area steeped in history..." Enrico Sasso reports about his solitary day on the north face.

I’d studied the climb for a month; I knew that with this little snow, with cold snap and sudden shifts in temperature the wall was likely to come into condition. I compared the face with photos I’d taken in the past few years while skiing in the area and noticed a possible line of ascent. I also asked local expert Andrea Parodi for information and he told me that that part of the face was untouched, apart for 1924 summer route, but this weaved away from the center of the face where I wanted to climb. No one had ever been there in winter, in particular not on such a direct line to the summit. Which is practically where I topped out, on the summit plateau, just a few meters below the cross. It’s a real direttissima I’d say.

During the climb I found myself dealing with unexpected difficulties, not so much on the ice, but on the mixed terrain. The last two pitches in particular were tough and I graded these M6 and M7 respectively. Confirmation of these difficulties came from the first to repeat the line, friends who will be doing the mountain guides course with me shortly, so I think I’ve been fairly objective.

I left home at 5:10, parked the car at 6:10 am, then made the 4 hour approach. I had to break a trail through the deep snow; I hadn’t expected this and actually hadn’t brought snowshoes or ski mountaineering skis. When I reached the base I was quite tired, but nevertheless I decided to give it a go. I just said to myself "let's see how it goes." I’d taken not much: a single rope, some friends and pegs, nothing more. And in the end I managed to forge this 400m climb.

The lower part was challenging but OK, on the upper section though I found myself fighting hard; I was faced with two corners and with crampons and ice axes I struggled to protect myself adequately and progress upwards. Inconsistent snow and lots of rock, not pleasant granite but smooth, weathered limestone. The last pitch was a kick in the teeth, an offwidth chimney where I had to do some acrobatics to squirm my way through. The only protection was my body; I got stuck in and tried to crawl upwards, moving from side to side to reach some hooks for my ice axes the end of the chimney and to place some gear and exit onto the plateau. There were five, six meters when my heart skipped a beat as I edged upwards, on self-belay, the rope dragging a little while I worried about the gear ripping below. What’s more, darkness was setting in. When I finally reached the cross I sat down and cried. And immediately dedicated this climb to my grandmother Rosa. I then descend down canale dei Genovesi, the adjacent gully, down climbing its upper section. At about 8:30 I returned to the car, tired but extremely happy.

Rose turned out to be a wonderful adventure on a backyard mountain, in the Ligurian Alps, not even an hour's drive from home. The though of having succeeded in establishing a new route on a mountain face that has always fascinated me, the highest and most impressive in the Ligurian Alps, still gives me goose bumps. And being able to dedicate it to a person so dear to me, my grandmother Rosa, proved to be the icing on the cake.