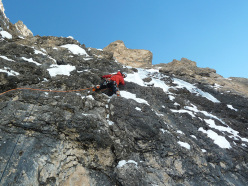 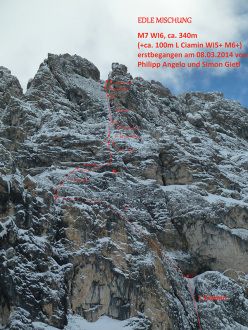 There's no need to state the obvious, that it's becoming increasingly difficult to find unclimbed lines of rock or ice in the Dolomites. But as sometimes happens, all you need to do is look up and observe what others before you might have already seen, but believed impossible.

In February my climbing partner Thomas Gianola and I repeated L Ciamin, the line put up by Adam Holzknecht and Hubert Moroder and during that climb a frozen steak caught my eye on the north face of Ciampanil di Mufreit. It seemed feasible, but who knows whether it would form every year.... best give it a go as soon as possible!

I told Simon Gietl about it and suggested we try it since we'd agreed we'd climb something together. I sent him the pictures and he was captivated. So on Saturday 8 March we meet at the motorway exit at Chiusa and, after the obligatory coffee stop, we drove up to the Grödner Pass.

It was 9am when we started climbing, three pitches up an icy chimney. Simon set off like a rocket and then, swinging leads, two hours later we reached the snowy ledge where L Ciamin ends. We rested briefly. We then worked our way around the large overhang leftwards and then searched for the line of least resistance, heading to the icy drip up above. But first we breached a snowy section and some mixed terrain to reach, three pitches later, the second ledge and snowfield. Another 100 meters of snow and we finally caught sight of that fantastic line of ice clearly visibile from below.

To reach the ice though we first had to climb 6-7 meters of rock, then traverse right and climb up a little further. I belayed on the right before the next step. Simon took over the lead. From below the pitch seemed simple enough, but as often happens, looks can be deceptive. The ice was vertical, brittle and broke easily - a delicate pitch that guarantees a " proper pump ". Fatigue began to set in but we'd almost done it. An easy ice pitch led to a short chimney and then the col, where this beautiful route ended.

We were overjoyed that we'd succeeded and believed it possible. Afte the ritual photos we abseiled back down to the base of the climb. The weather had been outstanding, the rock stunning, the ice vertical and the company superb: all the right ingredients for Edle Mischung, for a noble mix.

And at this point I would also like to thank the two Gardena lads for their hospitality. After our adventure they invited us to their hut and offered us some food and drink - fantastic!