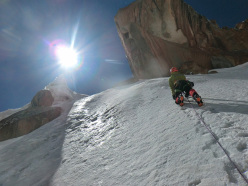 Bas Visscher climbs a ice pitch on the north face during the first asent of Double Trouble (TD-, AI4, 800m) up the NE Face of the Great Walls of China in Kyrgyzstan on 16/08/2013.
Photo by archive Bas van der Smeede 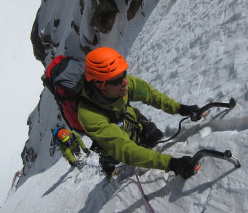 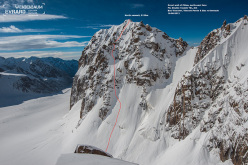 The line of Double Trouble (TD-, AI4, 800m) up the NE Face of the Great Walls of China in Kyrgyzstan climbed by Bas Visscher, Vincent Perrin and Bas van der Smeede on 16/08/2013.
Photo by Evrard Wendenbaum

On 16/08/2013 Bas Visscher, Vincent Perrin and Bas van der Smeede from Holland made the first ascent of Double Trouble (TD-, AI4, 800m) up the North-east face of the Great Walls of China (circa 5120m) in the Kokshaal-Too massif in Kyrgyzstan.

This summer a six-strong Dutch expedition travelled to the Great Wall of China in the Kokshaal-Too mountains on the Chinese - Kyrgyzstan border with the aim of forging a new line up the formidable East face. This was first breached by Border Control, a route put up in 2004 by a Scottish expedition comprised of Pete Benson, Matt Hallsand, Guy Robertson, Robin Thomas and Es Tressider, while in 2011 Germany's Ines Papert and Wolfgang Russegger chose a line nearby to establish Quantum of Solace. Both expeditions did not reach the main summit.

Unlike previous expeditions Bas van der Ploeg, Bas van der Smeede, Bas Visscher Vincent van Beek, Vincent Perrin and Saskia van der Smeede managed to reach base camp directly in a big six-wheel truck. Advanced Base Camp was established after 10 days of carrying gear and exploring. The strategy was to climb in groups of two and so the alpinists set off up three separate lines with gear and provisions for 4 days. Attempts soon ground to a halt for various reasons: Saskia was hit by rockfall and although not seriously injured she could not continue, while Perrin and Visscher bailed after failing to find a sheltered bivy spot. Although Vincent van Beek and Bas van der Ploeg continued up the middle pillar, they would later abandon their attempt due to lack of water and adequate gear.

The day after returning to ABC Bas van der Smeede, Vincent Perrin and Bas Visscher scoped a line on the North-east Face of Great Wall of China which they felt ideal for an alpine-style push to a virgin summit. They gathered all the gear they could find (notably only 3 ice screws and a birdbeak) and set off at 5:00am on 16 August in good, clear and cold conditions. After negotiating the bergshrund they climbed up some steep ice gullies, where an 10m 80° section was protected by just one ice-scew and the birdbeak hammered into the ice for additional protection. More interesting climbing led past black ice to the final section.

Bas Visscher noted "Although the final bit was not steep, we kept belaying since the snow conditions were very tricky and loose. The wind had created huge vertical corniches in a way I had never seen before. The more I approached the summit, the more loose and dangerous the snow became. It demanded careful climbing. Just below the highest point on the ridge I made an belay anchor so Bas and Vincent could follow. We couldn’t see if we had reached the absolute highest point on this very long horizontal ridge, but we quickly agreed it would be too dangerous to swim any further through these dangerous corniches. This was our summit."

According to Bas van der Smeede, the main summit lay only 40m higher but was separated by a heavily corniced ridge that would have taken half a day to climb. Happy with their ascent but worried about the "800m Abalakov threading mission" they soon started their descent.

The route has been named Double Trouble, in reference to both the tricky ascent/descent and to some of the usual stomach problems climbers experience during expeditions. "We felt happy to climb this route, a good consolation prize after our failure on the rock face" explained Bas van der Smeede, before concluding "the main wall of the east face remains unclimbed and would be a big challenge for future parties, weather permitting."