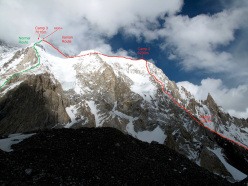 Since last Thursday three member of an Iranian expedition - Aidin Bozorgi, Pouya Keivan and Mojtaba Jarahi - have been stranded at circa 7700m after having reached the summit of Broad Peak (8047m) in Pakistan.

An Iranian expedition is in extreme difficulty after having reached the summit of Broad Peak on Monday 16 July and after having established a new variation attempted in 2009 that joins the normal route at 6800m. According to Desnivel, a rescue call was made during the descent on 18 July by Aidin Bozorgi, Pouya Keivan and Mojtaba Jarahi who were stranded close to the Broad Peak col at circa 7700m, exhausted without food and gas.

Two Pakistani high altitude porters climbed above Camp 3 at 7015m but unfortunately there was no trace of the trio. According to Desnivel, a few hours ago the agency that has organised the expedition, Adventure Tours Pakistan (ATP), stated that there is no more hope of finding the alpinists alive. This statement was immediately countered by the Iranian expedition that stated they did not agree with this conclusion and that all attempts to help Bozorgi, Keivan and Jarahi would continue, also with the help of other international alpinists currently at Broad Peak.