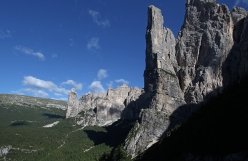 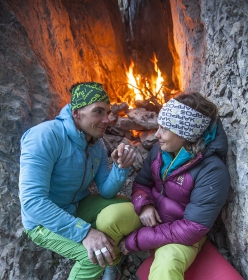 Donnafugata is a huge multi-pitch rock climb established in 2004 by Christoph Hainz with Roger Schäli on the south face of the Torre Trieste. 750 meters of demanding and beautiful climbing up one of the symbols of legendary Mt. Civetta in the Dolomites. Manrico dell'Agnola recounts its story in a film that now, together with film producer Karpos, has been placed online for everyone to see.

Only the eyes of those deeply in love know how to see true and absolute beauty. This holds true for Donnafugata, the film that Manrico dell'Agnola dedicated to his beloved Civetta and, in particular, to his Torre Trieste, the tower of towers in the Dolomites. This comes as no surprise, since dell’Agnola has written countless memorable (often solo) pages in Civetta’s mountaineering history. The highly experienced alpinist from the Dolomites elected that mountain as his second home, as a privileged abode for his soul. And like all those madly in love, he knows every nook and cranny of this peak, every gully, every feature and every vision, from the brightest and most flashy to the most hidden. For years dell’Agnola captured it all through his splendid photographs. Now he has recorded it with this film that provides unprecedented views and panoramas, both on the face and from unexpected perspectives, transmitting not only the magic of the Dolomites but also all his love for these unique walls.

The film features Sara Avoscan and Omar Genuin, a talented climbing couple from Belluno who as they repeat Donnafugata, a difficult and delicate work of art established by “grand master" Christoph Hainz (who intervenes in the film) and Roger Schäli. The stage is exceptional: the huge and famous south face of Torre Trieste in the Civetta group of the Dolomites. Sit back and enjoy the climbing as it unfolds, suspended above an immense void, between the clouds and unforgettable panoramas. This is Donnafugata, 22 minutes absolutely worth seeing. To dream of being there, climbing in one of the most beautiful places in the world, yearning to go there once again, certain that one day we will return…

27.07.2017
Torre Trieste, Via Cassin - Ratti and never-ending beauty
Manrico Dell'Agnola introduces in photos and writing the Torre Trieste tower in the Civetta group of the Dolomites and the route first ascended by Riccardo Cassin and Vittorio Ratti up the SE arête. Dating back to 1935, this is considered one of the most classic, beautiful and famous alpine outings in the Dolomites and Alps.