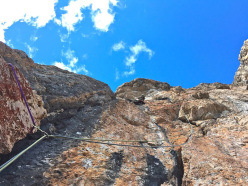 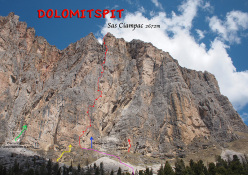 On 20/09/2015 Simon Kehrer and Manuel Baumgartner completed Dolomitspit (530m, VII, VI obl.) a new rock climb up the South Face of Sas Ciampac (2672m), Val Gardena, Dolomites. The route was started initially in 2007 (with Karl Unterkircher) and was completed in 2015 after three days of effort that included Kehrer, Unterkircher, Baumgartner and also Josef Willeit.

Sass Ciampac is without a doubt one of the most beautiful mountains in the circular Sella massif and an almost magnetic attraction for Simon Kehrer. Back in 2007 together with Karl Unterkircher, he had spotted a new line, close to the classic route Camino curvo. Karl had already made some previous attempts a few years earlier, with his habitual climbing partner Gerold Moroder, aka "Speedy". The two had started a few meters to the right of the obvious yellow corner but abandoned their attempt due to chossy rock.

In 2007 Simon and Karl, laden with gear, started slightly to the left of the previous route and took a more logical line upwards. After the first 5 pitches this followed the slabs and flakes rightwards for a further two pitches. Simon took the lead and jokingly said to Karl that he’d continue until he bumped into a previously established belay. And 40 meters later this came true when, dumbstruck, Simon came across a belay comprised of some hand-placed bolts. The obvious conclusion was that the line Karl and spotted had already been climbed by someone else. Exploring the next two pitches confirmed that the route continued. Disappointed Simon and Karl abandoned the route but vowed to return and climb new terrain to the left. Unfortunately though Karl Unterkircher failed to see this dream come true as he died on Nanga Parbat in 2008, on expedition together with Simon.

In 2012 Simon returned to the climb with his brother-in-law Josef Willeit. The two climbed a significantly different start, up decent rock. Unfortunately this attempt, after a few pitches, was called off due to strong storms.

Simon returned on 20/09/2015 together with Manuel Baumgartner to finally complete the route. This time success crowned their efforts and the two summited just before dark. The adventure then continued "badly" since the two had to descend with their climbing shoes (much to their feet’s delight), since they’d left their approach shoes at the base of the route. Abseiling down the route would have been simply too unsafe and risky in the dark.

Thanks to Vaude, Edelrid and SCARPA