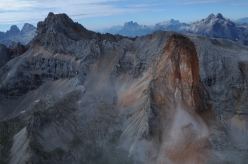 The rockfall on Kleine Gaisl (Braies, Dolomites) on 18/08/2016
Photo by Roman Valentini

The video of mountain guide Roman Valentini documenting the enormous rockfall that took place last week on Kleine Gaisl (Piccola Croda Rossa), in the Braies group of the Italian Dolomites

Yet more rockfall in the Dolomites, this time though of gigantic proportions, on Kleine Gaisl (Piccola Croda Rossa), the 2859m peak in the Braies Valley in the South Tyrol. The rockfall occurred in various stages between Thursday 18 and Saturday 20 August and according to initial estimates it detached circa 500-700 cubic meters of rock. 30m deep, the front is believed to be a staggering 200 meters wide.

The newspaper sto.it reported that the mountain had been monitored all of last week after a crack appeared circa 200m below the summit. Path number #3 that joins Rossalm to Stolla-Alm and path #4 from Brückele to Rossalm had previously been closed to avoid people from getting hurt.

The footage below was filmed by Roman Valentini, a mountain guide working for Alta Badia Guides, who was in the area on Thursday, August 18 at around 12:30. Although this is only the first, smaller part of the landslide, Valentini told planetmountain.com "It was 'sepctacular' ... I’ve never seen anything quite like it. It looked like a river in spate, with rocks half the size of houses tumbling down."

Valentini confirmed that as a precautionary measure a helicopter evacuated two hikers off the summit of Kleine Gaisl that afternoon. The second part of the collapse - the main rockfall - took place between the night of Friday 19 and Saturday 20 August.