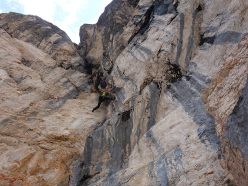 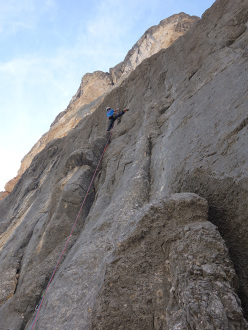 Those looking for a true alpine climbing adventures in mystical surroundings will find what they’re looking for in the Prags Dolomites, an in particular on the North Face of Punta del Pin. I’d already heard much about a stunning crack climb there, first ascended by Helmut Gargitter. In summer 2015 the time was finally ripe and together with my highly motivated climbing partner Raffaele Sebastiani I set off on an what would transform into an unforgettable journey. Actually, that weekend we’d planned to repeat a classic on Langkofel, but we discovered that all mountain passes had been closed off due to a bicycle race. And so we decided to take a look at the North Face of Punta del Pin.

The approach alone, along the Plätzwiese mountain pastures, lets you forget the hustle and bustle of the daily grind as you immerse yourself into an ancient world where time seems to stand still. All of a sudden you focus on the essential, and savor the intense feeling of here and now.

When we got there we were overwhelmed by the beauty of this face, comprised of compact grey slabs and countless cracks of best Dolomite limestone, similar to that on Schüsselkar in Austria’s North Tyrol. We didn’t have to examine the face for long to find our regal line: an overwhelming crack system that fell directly down from the summit. The geology of the Dolomites and the prevailing forces that contributed in shaping this unique crack formation made us pale with awe.

We returned a week later, full of enthusiasm and armed with a tent and provisions. And we were completely alone. During the next 2 days we managed to establish our new route, placing pegs at the belays only. We succeeded in climbing each pitch exclusively with the trad gear, and needed no extra pegs.

We started with a moderate warm-up pitch up a compact disk. From there, a crack led to a bouldery overhang, and this in turn led to a C shaped crack. Another 2 pitches brought us to below a large overhang, and from there we made a spectacular crimpy traverse left towards the fearsomely overhanging crack system. The expose took our breath away.

We were exhausted, both physically and mentally but a retreat at this point would have involved a complex and dangerous rope maneuver. We took a short break and then decided to give it a try. Several falls and words of encouragement followed, and then we managed to breach the challenging overhang, from where easy terrain led us overjoyed to the summit.

We returned in early July and succeeded in making the first one-day redpoint ascent, sending every pitch with out a fall. The climbing proved exciting right to the very end when, on the summit, we were greeted by a strong summer storm.