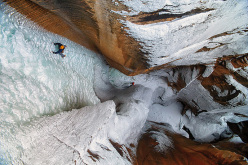 The film directed by Keith Ladzinski of 3 Strings Productions, with Scott Adamson and Jesse Huey in search of the ice climbing potential in Zion National Park, USA.

Desert Ice? Sounds like an oxymoron. But Scott Adamson and Jesse Huey know full-well that ice in the desert isn't a contradiction in terms: in February the two ventured deep into America's Zion National Park on an exploratory mission and came up trumps, making the first ascents of more than a dozen new ice climbs that range in height from 60 - 700 feet.

In truth prior to their trip there had been one recorded ice climb - The Zicicle (200 feet, WI5) – as well as rumours about a previous Lowe route, but it is only with this recent reccie that climbers have begun to fathom how much this area, famous for its superb sandstone crack climbing in spring and autumn, also holds in store for climbers in winter.

Check out this great film directed by Keith Ladzinski from 3 Strings Productions for more about what is surely one of the biggest and most exciting new venues in North America.