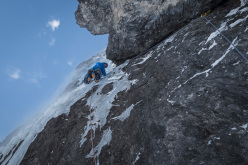 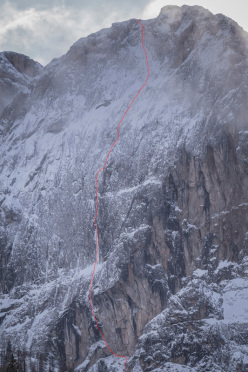 Immediately after the official calendar start to winter Austrian alpinists David Lama and Peter Ortner checked in with a difficult first ascent up the North Face of Laserz in the Lienzer Dolomites. The duo followed a line they had attempted the previous winter, up a series of cracks and corners straight through centre of the face, roughly between the routes Egger-Maier and Die Vergessene. In summer these tend to seep but in winter they form an "outstanding, demanding and gripping line" according to Lama.

After having checked out the weather forecast, on 26 December the two made their way to the Dolomitenhütte, the hut located circa 1.5 hours from Laserz, and spent the night there. They set off early the next morning, reached the base of the North Face at 6:00am and climbed continuously up the 600m face, returning to the hut at 9 in the evening after having abseiled off the West Face. The main difficulties are concentrated in the lower part of the route - in particular the crux fourth pitch with its 5m overhanging crack and poor rock - and while the difficulties ease off higher up as the mixed terrain gives way to ice, the climbing remains demanding and spicy throughout.

"We called our route Spindrift" Lama explained to Planetmountain "for obvious reasons! On the though whole conditions were pretty good, ice axe placements were fairly decent, although setting up good belays wasn't easy. During our first attempt the previous winter we'd been forced back after the first four pitches because we didn't have enough gear with us, so this time we took two sets of camming devices and this made the difference, I managed to find the courage and continue on up." No bolts were placed and only a handful of pegs and 2 nuts have remained in-situ. "The experience was fantastic" concluded Lama "we were climbing pretty much at our limit and had to be quick because of lack of daylight, hence only a few photos as the camera stayed in our rucksack for most of the time. It was nice to be pushed here in the Alps, to find a line which no one else has climbed before, right here in our backyard."

Lama is now on his way to Patagonia, not with Ortner like last year when they famously freed the Compressor Route on Cerro Torre, but with Swissman Dani Arnold.