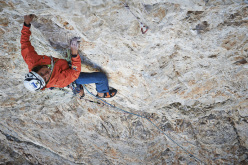 Simon Gietl and Patrick Seiwald have established and freed Das Orakel (IX, 320m), a new climb up the North Face of Lagazuoi in the Dolomites.

The route was established in spring 2012 during five days of efforts. Climbing ground-up, the two spent two days getting past the crux and had to resort to A3 aid. There are no bolts on the route and all pegs used during the first ascent were left in-situ.

The first free ascent was carried out in July 2013 and Gietl describes the route as follows: "where the route climbs dark streaks the rock is excellent quality, whereas the yellow areas are somewhat brittle. Overall the climb is extremely beautiful but demanding, both physically and mentally."


NB: Gietl points out that the nearby Via dei Larici can no longer be climbed due to rockfall on the first pitch.