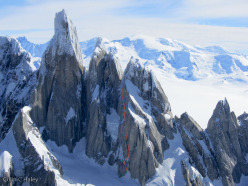 Colin Haley and Jon Walsh have made the first free ascent of Tobogan (700m, AI4, M6) on Cerro Standhardt, Patagonia.

Making the most of a short weather window, North American alpinists Colin Haley and Jon Walsh have made a swift ascent of the mixed climb Tobogan on Cerro Standhardt. The obvious slanting line climbs a series of ramps and gullies up the SE Face to finish at the Col dei Sogni located between Cerro Standhardt and Punta Herron and after a first attempt in 1994 by Spain's Pepe Chaverri and Italy's Ermanno Salvaterra it was finally climbed in 1999 by Rolando Garibotti and Silvo Karo who at the time were forced to use some aid on the lower sections (6a A1 70˚ M6).

Haley and Walsh came across icier conditions than the first ascentionists "allowing us to enjoy high-quality ice and mixed climbing, rather than the "alpine groveling" that Rolo refers to" explained Haley, adding "And while the dry conditions forced Rolo and Silvo into aid on some of the lower portions of Tobogan, the good ice conditions allowed Jon and I to make the first free ascent (if you're into that kind of thing... :P), at reasonable difficulties I would estimate to be AI4, M6."

This is likely to be only the second ascent of the route but Haley explained that the prize is still there to be picked: "like Rolo and Silvo, we didn't manage to climb any higher than the col, and the route remains unfinished to the summit of Punta Herron or Cerro Standhardt."

Haley's ascent comes after other climbs in the Fitz Roy - Cerro Torre region this austral summer season which include Aguja Guillaumet twice (the Guillot-Conqueugniot with Walsh and the Comesaña-Fonrouge with Spain's Manu Cordova), Cerro Solo (via the Insomnia with Italy's Andrea Di Donato) and a repeat - with Di Donato - of the Cerro Torre Ragni Route which Haley describes as "the most spectacular ice climb in the world".

For a detailed report and more photos check out www.colinhaley.blogspot.com and www.alpinestyle.ca.