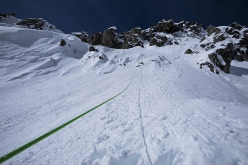 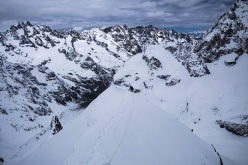 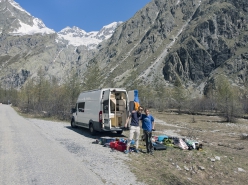 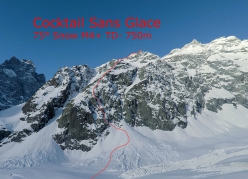 The line of Cocktail Sans Glace on the North Face of Pic Coolidge in the Écrins massif (Markus Kirch, James Price )
Photo by Markus Kirch  archive

German alpinist Markus Kirch reports about the first ascent of Cocktail Sans Glace, a new mixed route established in mid-May with James Price and on the North Face of Pic Coolidge in the Massif des Écrins, France.

James Price and I met for two weeks in late May to have a go at some big alpine climbs around Chamonix and the Valais. But just as we started our trip, bad weather dumped more than two meters of snow on the Western Alps. This made the already difficult snowpack and avalanche situation even more challenging. Indeed, during a climbing trip to the Valais the previous week I’d had to turn around twice because of the poorly settled snowpack.

Our wild card was the Massif des Ecrins, where significantly less snow had fallen. The weather forecast promised lots of sun and, with the days being long, we assumed that the new snow would settle quickly. With a bit of luck, after two or three avalanchy "clean-up" days, we would have prime conditions to climb steep snow, rock and maybe even ice. Our main objective was the Goulotte Gabarrou-Marsigny on the south face of the Barre des Ecrins – but before that we wanted to dial things up a bit on a shorter line, as this was going to be the first time we climbed together.

On May the 18th, the second sunny day after the snowfall, we set out to climb a warmup route. Our choice fell on Des Coinceurs et des Coincés, a steep ice gully on the north face of Pic Coolidge (Pointe 3343). The climb is technically difficult, but not too long (85°/90° Snow WI4 M5 750m TD). The avalanche danger was still high though, and all climbs on this face follow gullies or couloirs (at least partially); usually they provide good ice as they act as "drains" for the snow slabs above, but they also lie precisely in the avalanche zone of those fragile slabs.

Looking at the pictures in the guidebook we found a small ridge that ran up the face just left of the gully we’d originally planned on climbing. On this ridge, we reckoned we might be able to stay away from most of the fragile drift-snow packs. So we considered switching to this crest, depending on the prevailing conditions and our gut feeling during the ascent. During this planning stage we considered this route up the ridge as nothing more than a small variation, we had absolutely no idea that this would actually result in a completely independent line through the face.

We started the approach with skis on left bank of Glacier Noir at around 4am and reached the base of the climb at dawn. A couple meters left of Des Coinceurs et des Coincés we traversed left below a rocky section on a steepening section of snow adhering to the rock. The traverse was exciting because the soft snow was stacked steeply (about 75°) and at one point we had to step up high on the rock and get through a "tunnel" of snow formed by the wind. Quite strange with skis on the backpack... unfortunately we didn’t take pictures of this tunnel pitch.

Along the crest we climbed alternating sections of snow and rock. The climbing was never difficult (sections M4+), but with the large ski boots, and skis on the pack, it proved quite delicate at times.

Protection was also exciting: we climbed the whole route with a running "belay", because there were not enough options to build anchors and also because pitching it out would have taken forever… And even so, we were able to place only 5 or 6 pieces of gear in total – so for long stretches of the climb, an extra level of caution was required. A perfect day of "Classic Alpinism"!

We descended on the south side, down climbing a couloir (about 45°) and skiing down the Glacier Noir in the last daylight. The entire outing, from car to car, required about 13 hours.

On the entire climb we found no ice whatsoever (hence the name Cocktail Sans Glace), only steep snow and rock. Since there was a lot of snow during our ascent, we don't know what the rock looks like below the snow cover; in different conditions, the character of the climb will certainly be considerably different.

A few days later, on the 27th of May, we repeated Goulotte Gabarrou-Marsigny on the south face of the Barre des Ecrins (90° WI5+ M5 ED 2400m). Such a beautiful line! We climbed this in a continuous push from car to car in 25h 10mins, with quite an interesting strategy. Considering that we had never climbed together before, I think we had quite a successful trip with both a first ascent and the repeat of our main objective a couple days later.