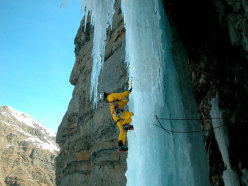 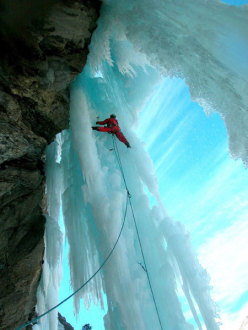 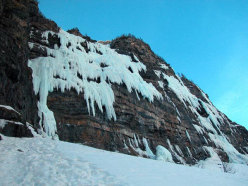 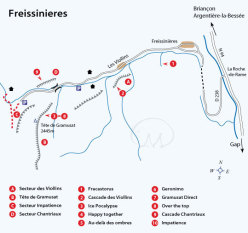 The map of the icefalls at Freissinières, Ecrins National Park, France
Photo by Mario Sertori

Located in the Ecrins National Park and by now a legendary name for ice climbers across the globe, Freissinières is without a doubt one of the world's most important ice climbing venues. This winter laboratory is where new techniques such as dry-tooling are put to the test, but Freissinieres is highly appreciated not only for its new testpieces and long, difficult routes, but also for its countless ice falls suitable for beginners.

Vallée de Freissinières is a side valley of the Vallée de la Durance: from Briançon drive south towards Gap and, once past Argentière-La Bessée which hosts the annual international ice climbing meeting, exit the route national. Drive up over the hill and into the flat valley which heads off east and feast your eyes on the beautiful rock walls and their sparkling bolts. Continue over the hillock that separates you from the first ice falls in Freissinières, then continue on up through the narrow street in the "ghost village" Viollins. Hold tight here: right in front of you looms an enormous, magnificent icefall. Silent and bewitching, this mighty sheet finishes in a big rock cave protected on either side by two breathtakingly beautiful drips. Above this, another steep pitch adds the finishing touches to this crystal castle. The Cascade de Viollins is one of those "not-to-be-missed under any circumstances" and it alone is worth the journey here. The great Christophe Moulin described it, unsurprisingly therefore, as nothing less than an "impressive ice structure."

Fom  Viollins proceed east to me a series of incredible giant drips on the shaded side of the valley. These engaging outings make their way up limestone walls which seem to have forged their way out from the center of the earth. Right at the end of the valley you stumble into the mother of all pearls, the great Tete de Gramusat, a 600m high rocky outcrop festooned which iced walls of all shapes and sizes. The vast number of routes here stand testament to the intuition and ability of the first ascentionists who, a glance at the route book reveals the obvious, are some of the best ice climbers in the world.

The routes are authentic journeys into the world of vertical ice. Alongside these though there are some fantastic modern mixed routes, such as the famous âQuartiers nordâ, on-sighted by the Italian specialist Mauro Bubu Bole during one of his glorious French raids. Close to the road and directly opposite this testpiece lies the sector Initiation which offers a huge number of routes ranging from easy beginners to short drips, bolted single-pitch dry-tooling outings and the long and complex Chantriaux (200m 6) which ascends a gully before crossing the old road which leads to Dormillouse, the mysterious village located in front of Tete de Gramuzat.


IN DETAIL
Getting there: From Briançon take the RN 94 to Argentière-La Bessèe. Three kilometers after Argentière and just before Roche de Rame turn off right, drive beneath the railway tunnel to Freissinières (7/8km). Continue on from here past the Les Viollins and Mensals to where the road finishes in a car park close to the beautiful Dormillouse hamlet. The road is often closed due to snow at Mensals, which results in an additional 30 minute walk-in.

The environment is truly unique: the sun shines onto the bare side of the valley, while long drawn out shadows reign in silence opposite among crystal creatures who live in harmony with the dark rock walls. The valley faces east-west, and the routes on the Initiation sector face the sun, while all other icefalls remain locked in shadow until late in the season.

Accommodation: There are small hotels and bed and breakfast accommodation in Argentière la Bessèe. In Freissinières we highly recommend Gîtes les 5 Saisons. This is run by local Mountain Guide Lionel Condemine who has up-to-date information about ice conditions. As an alternative, consider Hotel Voudois.

Best time of year
December to March. Best conditons can generally be found from the end of January to the end of February.
Information: www.ice-fall.com updated daily by the mountain Guide Gerard Pailheiret.

Climbing beta
Grades: mid grade and harder. There are some true stamina testpieces on the long drips on Tete de Gramusat
Gear: two 60m half ropes, some pegs and slings for the belays, plus a threader for Abalakov ice belays.

Belays: almost all belays are constructed on ice. There are a few in-situ pegs and every now and then friends can be used to back up the belay.