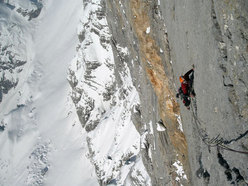 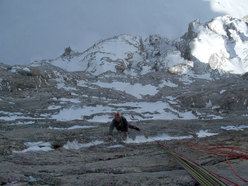 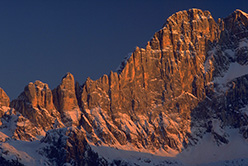 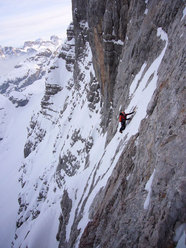 On 19 March 2010 Alessandro Baù and Nicola Tondini carried out the first winter ascent and third ascent overall of Captain Skyhook (500m + 380m pedestal, 7b+) on the Northwest Face of the Civetta, Dolomites.

It's hard to say where modern day alpinism is heading, hard to understand the direction it's taken. What is certain is that the Italian mountaineers Alessandro Baù and Nicola Tondini didn't stop to ask themselves too many questions, they simply listened to their heart. Perhaps this is what counts most in this great winter ascent up the immense and serious NW Face of Civetta in the Dolomites.
Their aim was the legendary Captain Skyhook, the route located between Punta Civetta and Punta Tissi and first ascended in 1987 by Paolo Crippa and Dario Spreafico and dedicated to Riccardo Spreafico. 500m + a 380m pedestal which the first ascentionists estimated to be ED+ max 7+ A2. This was then ironed out to 7b+ in 1992 by Roland Mittersteiner and David Hall with their massive first free ascent and first repeat, in a single day. What is certain, too, is that this is a great route, and the 4 ascents in its 23 year history surely indicate something... As does the fact that it was Alessandro Baù who, this summer, carried out the first solo ascent. Last week the partnership Baù – Tondini clocked in with the first winter ascent and third repeat overall, in an impressive 29 hour trip from the refuge to the summit and back, while 13.5 hours were needed from the base of the pedestal to the top of the climb.
Let's return to the question at the start, to where modern alpinism is heading: it seems to us that it's all been explained clearly in Nicola Tondini's debrief below. He talks about the joy, but also the tiredness which mixes with the satisfaction of an alpinist who has truly savoured the mountains. He talks about a great mountain and a great route. This, and nothing more. It's all that really counts.

Adventures lie within each of us: it's up to us to choose the stage where we want to experience them. We chose this corner of the Dolomites, somewhere beautiful, solitary and impressive. I'd been in touch with Alessandro throughout winter to program a "lightening trip" somewhere for a couple of days, but conditions continued to be poor. At the start of March I looked at my diary and due to work commitments I opted for a one-day raid. Ale threw the idea at me: let's try a quick ascent of Captain Skyhook? My first reaction was that this was crazy, but just as quick I realised that this is what I'd been looking for. Yes, let's do it!

We met up on Thursday 18 March at 18.30 outside Venice with our ski mountaineering gear, ice climbing equipment and rock climbing gear and set off for Val Zoldana. We reached the car park at Palafavera and skinned off at 21.30 and reached the winter bivy at Rifugio Coldai an hour later. After a short nap we woke up at 2.30, and set off at 3.00 from the refuge with our skis once again. We reached the base of the 450m high pedestal of the route Aste-Andrich-Capitan Sky-hook at 5.00 and started climbing with ice axes and crampons. Just before 8.00 we finally managed to put on our climbing shoes. I conceded myself a quick phone call home, to celebrate father's day.

As we climbed the pedestal I felt lucky, we were combing all the disciplines I liked, one after the other. In front of us lay a beautiful and demanding playing field. The rhythm of the ice axes, which penetrated the the hard packed snow above the treacherous rock slabs, gave me joy. Beneath us nothing but void and snow, above us the impressive grey compact wall, the limestone face of Monte Civetta. And there we were, two insignificant points who left their traces on the snow slopes and the mixed terrain. The two of us, there, gripped tight to out external safety anchors (ice axes and crampons) and those interior anchors. We didn't find any places to belay and so we soloed up to the base. I was happy up there: as I gazed at the wall I got lost in the immense grey sea which towered above us. The line was beautiful and daring. I believe it's a masterpiece and my thoughts took me to the first ascentionists Paolo Crippa and Dario Spreafico (back in 1987), to the first repeat (and first free ascent) by Roland Mittersteiner in 1992 and to the fist solo this summer by Alessandro. All of these were extraordinary achievements.

We continued to climb, I felt good. The climbing was the one I like most: technical and fingery. We climbed fluidly and without hiccoughs but due to the difficulties we couldn't climb fast. We swung leads every 2 - 4 pitches so as to spend less time hanging around on belays. We took a small haulbag with a thermos, something to drink, a down jacket and some slings to equip the belays. On the final pitches I began to feel tired and the hope of a "free" ascent gave way to a couple of aid sections (one on a cliff, the other on a micro-friend). We reached the final belay shortly after 18.30. The biggest difference between summer and winter is shown clearly at this point. Instead of descending quickly down the Via Ferrata degli Alleghesi and a strolling leisurely down the path, we had to descend down the route and the long and treacherous mixed pedestal.

We needed to establish all the abseils and many required big pendulums, sometimes we had to clip gear to abseil down big overhangs. Half-way down our rope got stuck and we were forced to cut it, luckily though we had the thin haulbag rope. We reached the base at 23.30, having finished the food and drink many hours earlier. The morning's enthusiasm gave way to tiredness, hunger and thirst. We set off down the steep snow slopes, totally alert, and realised that the delicate mixed section could only be descended with the aid of a fixed rope. After searching for half an hour we found a crack and placed a peg. We descended diagonally using a Machard knot for 60 meters, but when we tried to pull the ropes they got stuck. I climbed back up, sorted them out as best I could and with immense patience I tried to pull them every 5 meters... at 1.30 we finally recovered the ropes.

More snow slopes, then two abseils into the gully led to the base of the Aste corner. This was followed by countless steps with ice axes and crampons and maximum attention to reach out skis. By now it was 4.00am. The return to Rifugio Coldai, with its slight ups and downs, felt like battle of Caporetto, a tremendous defeat. We were slow and tied. At one point I fell asleep on the snow and was woken up by Ale as he overtook me. We finally reached Rifugio Coldai at 7.00am, after 28 hours on the run! We sorted out our gear, drank something and then skied back down, finally fast and free of the climbing skins. We beamed as we carried out the two turns on the piste back to the car and the campsite where Claudia, Ale's girlfriend, greeted us with dinner (the one planned for the previous night) and an exquisite cake!

Particular thanks
Nicola Tondini would particluarly like to thank: Marmot, Wild Climb, Ferrino, Keyland, Turnoversport; Alessandro Baù would like to thank: Montura, Scarpa and Kiwi Sport for the excellent gear they always provide.