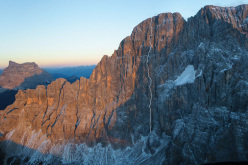 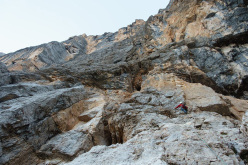 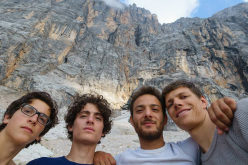 It’s been years since the weather was as amazing and stable as during the last couple of weeks. Understandably many alpinists headed up into the mountains, to flee from the oppressive summer heat and to crown their dreams repeating existing routes and establishing new lines. At times important ones. Such as, for example, the route put up by young talents Martin Dejori, Titus Prinoth, Giorgio Travaglia and Alex Walpoth who at the start of August completed their Via degli Studenti, a route they had started last year together with Marta Mozzati up the immense NW Face of Civetta.

The new route takes a circa 1000m line up the section of the NW face between Weg der Freunde, established in 1967 by Heini Holzer, Sepp Mayerl, Reinhold Messner and Renato Reali, and Solleder, put up in 1925 by the Germans Emil Solleder and Gustl Lettenbauer. The details are as follows: Via degli Studenti starts to the right of the Messner route and ascends the 500m pillar past difficulties up to VII. At the top of this it crosses the Messner route where this traverses right and tackles the most overhanging section of the face. This was breached via four difficult pitches, climbed "with a few aid moves and resting on the pro", with difficulties up to VIII- / A0. Beyond the overhangs a further two pitches, climbed in the dark, led to the bivouac. The next day a further two pitches led to the Solleder route, with which it shares two pitches, before continuing straight up where the Solleder bears right. After another two pitches and just short of the summit the new route crosses Via Comici where this traverses right.

"The last two pitches probably follow the Cassin variation" Dejori and Walpoth told planetmountain.com, adding "on the lower-angled slopes below the summit we climbed the easiest line, anything else would have seemed forced, so in total we shared 4 pitches with existing routes (2 on the Solleder and 2 on the Cassin)." In order to do so, to climb these almost 1000m, two attempts were needed: the first on 8 September 2014 together with Marta Mozzati to climb the first 7 pitches, and the second on 3 and 4 August this year to complete the climb. It is worth noting that a few days after their first attempt Walpoth and Dejori repeated nearby Colonne d'Ercole on Punta Tissi, while the line of the new route was identified by Travaglia and Mozzati at the start of summer 2014.

As to the style of ascent, Dejori and Walpoth explained: "We took 5 bolts with us and some rivets, we didn’t want to risk not finding a good belay seeing that there were four of us and the haulbag was really heavy. But as we climbed we almost forgot we had them seeing that the face gave us a helping hand." Furthermore, Dejori and Walpoth explained that some sections were climbed with the use of aid by the leaders, but that they were freed by the second. The first free ascent still awaits therefore, but the alpinists have no plans on returning in the near future. On the contrary, "we're overjoyed with what we’ve done" the South Tyroleans explained.

Time will be needed for the complete grade to be put forward, but this minor detail apart, we feel we can state that this is a high calibre addition, perhaps even a sort of "superdirettissima" dreamt of by many up one of the most beautiful and important mountains in the Dolomites.