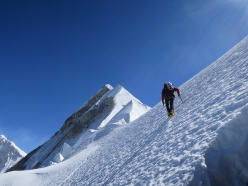 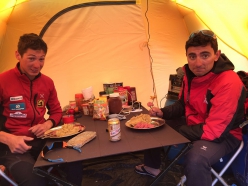 After a few nights spent at about 5700m, the Italian alpinists Marco Farina and François Cazzanelli have concluded their acclimatization prior to attempting the unclimbed north face of Chamlang Peak (7319 m), Nepal. Conditions are not ideal conditions and the reconnaissance phase is longer than expected.

As soon as they arrived at Base Camp, the climbers Marco Farina and François Cazzanelli started climbing to progressively higher altitudes to acclimatize and evaluate the conditions on the mountain itself.

The duo spent a couple of nights at about 5700m,in order to climb above 6000m. At present, the mountain is in poor condition due to lack of snow and ice and the routes they had hoped to climb on the North Face are unsuitable. The Italians are therefore considering attempting other targets, in line with their "Vertical Dreams” project.

The climbers are in high spirits and Cazzanelli reported “Acclimatization today up to to 6330m… The good thing is we’re both on great form!!"


Italian mountaineers Marco Farina and François Cazzanelli have reached the base of Chamlang Peak (7319 m), Nepal. In the coming days they will begin their attempts at forging a new route up the unclimbed, 2000m high north face.