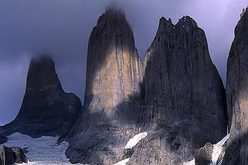 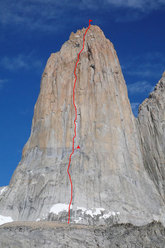 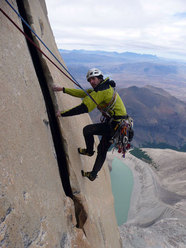 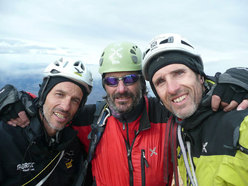 The new 23 pitch line includes various 65/70m pitches climbed free up to 7a+, with some hard aid up to A3+ which totals circa 20% of the highly esthetic line. Gear was initially transported to the base of the route with the help of 5 other Italian mountaineers and when these left the trio set to work. They prepared the first section over a three day period before spending 11 days for their summit pilgrimage, which included a final 400m summit push. El Gordo, El Flaco y l'Abuelito comes almost a year to date after the first ascent of another route by the same team in the same region, 'Osa, ma non troppo' on Cerro Cota 2000.


CENTRAL TOWER OF PAINE - East Face
by Fabio Leoni
Everything changes! The mountains are always the same, but everything that revolves around them changes completely. Let me explain myself better: Rolando Larcher, Elio Orlandi and myself are now in El Chalten after spending 20 days on the Paine tower in complete isolation. Last year we wrote: "Just off the tourist’s beaten track one can still breathe enjoy a Pataonia of times gone by" and that's exactly what we opted for this year.

Flight from Italy and rush to the base of the wall in just 3 days, to finally take in the emotions of what an unknown Patagonia had to offer. 20 days, 3 friends, nothing else except for wind, rain and hardship. Sleeping half awake, listening to the beating wind, attempting to understand what tomorrow would bring, climbing without any outside pressure whatsoever, simply for the pure joy of climbing. A clean style of ascent, an enormous face, following a line still feasible.

I said that we're now in El Chalten, at the base of Cerro Torre and Fitz Roy, resting after having made the first ascent of a new route in Chile's Paine region, more precisely the Ease Face of the Central Tower. More than 1200m of granite which severely put us to the test.

Three days preparation, plus 11 days on the wall without ever descending enabled us to create 'El Gordo, El Flaco y l'Abuelito'. We reached the summit on 07 February at 6.00 pm, leaving a work of art beneath us: 23 pitches, many up to 65/70m long, with difficulties up to 7a+ free, and A3+ aid (thankfully only 20%).

Here in Chalten everything seems different... the mountaineers live their isolation in a different manner, they simply avoid each other, all race upwards in a single day and he who arrives first wins!

I'll try and explain myself again: the mountaineers no longer set off from their base camps, instead some weather forecast gurus provide one forecast after the next and all remain in town, drinking beer in front of a monitor all day long, looking at internet waiting for the famous "weather window".

When the right moment seems to arrive they all race off and, in this exceptional January, queues form, people tread on each others feet, some head off secretly, whilst others set off at night to precede everyone else...

With good weather conditions everything is much easier, the great routes are repeated, the traverses fall one after the other and now, finally, the gurus have some rest... perhaps peace will return to base camp once again. Happy Patagonia to all!


ADIOS, TORRE CENTRAL
by Rolando Larcher
You aren't fulfilled innerly on climbs like this when you reach the summit, nor when you return to the base. You are happy but it's a subtle joy, you're too concentrated physically and psychologically on returning back to safety to truly take it in.

The inevitable human adaptation to a hostile environment takes the upper hand. Living on the wall becomes the norm, transforming the immense fortune of reaching the summit into something almost completely obvious.

Only on the return back to valley, to civilisation, does the body slowly regenerate, the mind relaxes and, equally slowly, you are overcome by a profound sweet sensation of fulfilment, of joy, of sense of having achieved something.

An intoxicating nectar which flows and strengthens our great friendship. A beautiful sensation which grows as the destination shrinks, reflected in the car's rear-view mirror as you drive away.
Adios, Torre Central