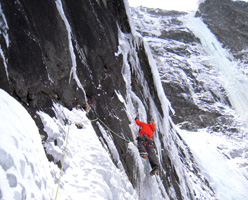 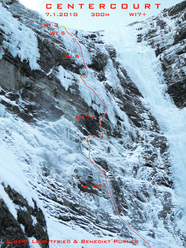 On 07/01/2010 Albert Leichtfried and Benedikt Purner made the first ascent of the 300m "Centercourt" in the Gasteinertal. Graded WI7+, this is the hardest pure iceline in Austria and one of the hardest in the world.

After teaming up in early December to climb the massive Moonwalk (1000m, WI6/M7), last Wednesday the two Austrian Mountain Guides Albert Leichtfried and Benedikt Purner decided to check conditions in the Anlauftal close to the Gasteinertal and Bad Gastein. While speeding up two classic icefalls, "Supervisor" (270m, WI6) and "Seidenraupe Direkt" (200m, WI5), their attention was drawn to a line located between 'Land under' and 'Rodeo'. Local Hans Zlöbl, who back in 1998 climbed the still unrepeated Landunder WI7-,confirmed that he had been observing it for years and that it had never been climbed previously: the match for the following day was decided.

Purner opened the first set by climbing off from the ledge right into severe difficulties. The seemingly unclimbable slab revealed to be extremely difficult but nevertheless climbable. With a bit of creativity, the odd Specter, Pecker and small Cams all offered distant protection, while the belay on three C3's was "something for our photo album".

Leichtfried then served for the next set. The line led steeply over thin slivers of ice which weren't fully attached to the rock below - tiring weaving upwards enabled the Austrian Mountain Guide to find unearth pro on both the rock and ice. This was followed by a short overhanging section practically devoid of ice. Progress seemed impossible and a fall from here onto the poor icescrew would definitely have had bad consequences. But Leichtfried had an ace up his sleeve, or rather, a Rocpec clipped to his harness: 15 minutes later he managed to place a bolt and the nerve-wracking game continued. The crux didn't give up easily and proved stubborn and extremely thin: a 6cm icescrew, screwed in only halfway, offered only faint protection but a few moves later Leichtfried pulled over the drip to place the first good screw and, with a sigh of relief, reach the belay. This dangerous set had taken 1.5 hour and Leichtfried commented "a fall from the difficult and extremely thin crux would have serious consequences and must be avoided at all costs."

Purner then took over for the third set, climbing steep, cauliflower ice which led to brittle curtain beneath the roof. The ice remained thin and his picks often scraped the underlying rock, but thanks to a couple of icescrews and intense motivation he managed to reach a ledge. Two slightly easier pitches, not to be underestimated by any means, then led to the top. The two winners descended to safety down the normal route to the left of the waterfalls.

Leichtfried described the route as "an incredible line of tremendous difficulties" and the 33 year old provided us with the following insight into this latest creation: "as usual it's hard to put forward a grade, especially when you enter into a different realm. What is certain is that this is the hardest I've ever climbed on ice. I can't imagine that there's another route which demands as much climbing ability as Centercourt. Physically my forearms felt as if they were climbing an M8/9, but the hooks were in ice. Psychologically it almost felt like I was soloing it. In reality it requires refined mixed climbing ability so that you've got enough stamina to weight each hook properly on the thin ice and carry out each move exactly. Even the smallest of mistakes would result in a fall, and a fall at the wrong point would have been very long indeed. I know of only two other routes that have been graded  WI7+: "Second choice" in Norway by Will Gadd and my "Senda real" in Chile. Although the latter route is physically more difficult, psychologically it is  significantly easier. On the whole I reckon it's easier than Centercourt. And if I have to compare it to some of my other first ascents, I'd say this means as much to me as my Illuminati in the Dolomites, perhaps even a bit more so, because it's a pure ice climb..."