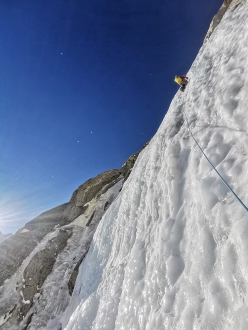 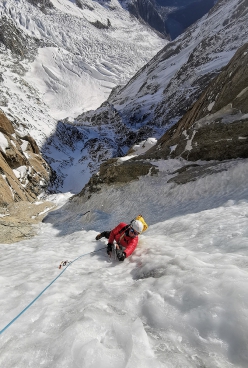 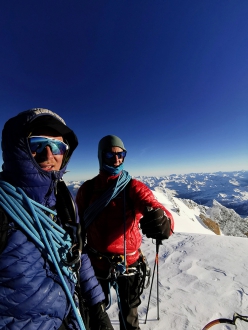 Cascata Major on the East Face of Mont Blanc:
Photo by Giuseppe Vidoni 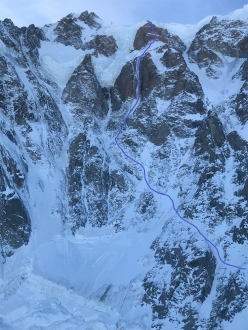 On the east face of Mont Blanc Giuseppe Vidoni and Francesco Civra Dano have climbed an icefall that had never been ascended before. Described as 'a real icefall at 4000m, about 200 meters high in the middle of the Brenva face’, the line then took them to the summit of Mont Blanc. Vidoni tells the story.

Italian mountaineers Francesco Civra Dano and Giuseppe Vidoni have added a beautiful, important new route to Mont Blanc that weighs in as one of the most interesting additions to the massif in recent years. Situated on the wild east face, to the left of the Major route and to the right of the Poire, it breaches the red pillar which hosts the Mazeaud - Sorgato rock route, following the drip that formed perfectly this autumn. The pair climbed the route on Saturday 20 November, then continued to the summit of Mont Blanc and bivvied at the Goûter Refuge before descending the following morning. According to initial research, the route has never been climbed before and given the exposure, right in the heart of the legendary Brenva face, it is easy to comprehend why. The numbers of Cascata Major - VI / WI5 - indicate very little at this point.

There was no way I couldn’t notice it. There it was, right in front of me, staring at me every morning for the last three weeks. Illuminated with the first rays of sunlight, up there at 4000 meters. If you look at the east face of Mont Blanc from Courmayeur, and if you are passionate about mountaineering, you cannot fail to notice this 200 meter drip right in the middle of the red granite pillar.

What a face! Mont Blanc’s so-called Himalayan face, the Brenva, over a thousand meters high, hosting some of the most beautiful and demanding routes in the Alps such as the Brenva Spur, the Sentinella Rossa, the Via Major, the Poire. It’s immensely fascinating, but also highly dangerous wall due to the huge seracs that loom above the face.
In short, the line seemed like a dream come true! And like whenever I see a good-looking line and imagine climbing it, I wonder if it’s been done before. Probably yes, I reckon. But I feel like checking nevertheless, and immediately start searching through all the various guidebooks and websites. Zilch. I fail to find any mention of this icefall or a possible climb nearby. Yes, the pillar has been breached by a route (the Mazeaud - Sorgato) but this lies a bit further to the right, on rock. It seems as if the icefall has never been climbed before. How come? Perhaps it’s never really come into condition; possibly in the past, but only fleetingly. Who knows. In the past two years that I’ve lived in Courmayeur, I’d never seen it before.

WOW we simply had to give it a go, it just couldn’t be ignored. I kept thinking about this amazing drip, and started keeping track of the weather. It hadn't snowed for five days down in the valley, and hadn’t snowed much in general in the Mont Blanc massif. So the snow, thanks to these beautiful days of high pressure, would have settled. And the forecast seemed good, no winds and clear skies for three days, before getting worse and starting to snow. Ok, the time had come to give it a go!

I tried to ask some friends who might be interested and determined enough. When I called Franvcesco Civra, and sent him some photos, he immediately replied enthusiastically: yes, let’s go, I’d noticed it, too… it’s a cool idea, but I’m currently climbing at Finale. But if you reckon it’s the right moment, I’ll come home straight away.

And so, early on 20 November, we set off from the Fourche bivouac, guided by the lights of our head torches. We knew that reaching the base wouldn’t be easy. We’d have to break trail to cross the Brenva glacier, and because of the gaping holes coved by a layer of fresh snow we progressed carefully. On reaching the Moore col it wasn’t easy to identify the best traverse line that would lead us to the gully. We had to race across and not stop for a second, and not think about the seracs right above our heads. The full moon gave us a big hand, and luckily we easily managed to reach the gully that led us straight to the base of the icefall.

We racked up at first light. The ice looked perfect, a real icefall! The ambient was one of the most spectacular I've ever seen. We started climbing first ice pitches, and climbing grade V ice at 4000 meters required effort and commitment. Although the ice was good, it was thin at times and the ice screws, even the short ones, didn’t enter fully. The icefall was continuous and mostly vertical, with little chance to rest. With determination, and after five pitches and about 170 meters, we left the icefall and reached the snow slope above.

The slope proved to be less easy than expected, as it forced us to front point continuously due to the layer of ice hidden fifteen centimeters below the snow. With burning calves we reached the base of the last pillar and finally managed to rest and drink the last drop of water.

It’s still challenging to reach Col Major and the top of Mont Blanc from there: you still have to breach the last pillar, the seracs and continue up the snow slopes to the summit. We opted for the direct line climbed during the 1953 first winter ascent by the mountain guides Arthur Ottoz and Toni Gobbi. Although more difficult, in their opinion this really constitutes “the most logical and fastest way” to the top.

We alternated breaking trail and reached the top by mid-afternoon. On the summit of Mont Blanc, tired and exhausted, we shook hands, happy and excited about this new climb. The we began the descent towards the Gouter winter refuge which we reached at last light.

24.06.2020
Video: Edmond Joyeusaz skiing the Mont Blanc Brenva Face
The video of the mountain guide Edmond Joyeusaz and his ski descent of the Brenva Face on Mont Blanc, carried out on 25/05/2020 down the climb first ascended by Gianni Comino and Gian Carlo Grassi in 1979.

12.03.2019
Cimon della Pala: Giuseppe Vidoni and Gabriele Colomba forge new mixed climb in Dolomites
On 24/02/2019 Giuseppe Vidoni and Gabriele Colomba made the first ascent of Via degli Allievi up the north face of Cimon della Pala. About 700m high and with difficulties around AI5 M4, this is likely to be a new mixed climb in the Pale di San Martino group in the Dolomites