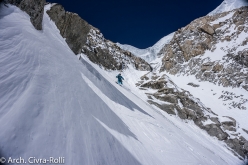 Major Route Mont Blanc: one turn after the next leads to the Brenva Gran Couloir. The ambient seems like the Himalaya, the snow is perfect
Photo by Luca Rolli / Francesco Civra Dano 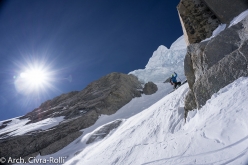 Major Route Mont Blanc: after descending off the summit plateau, we downclimb for 15m between the seracs. A short abseil leads to the start of the difficulties: we're totally concentrated
Photo by Luca Rolli / Francesco Civra Dano 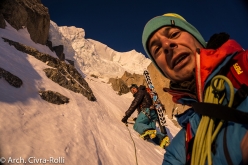 Major Route Mont Blanc: after climbing for 6 hours through total darkness the sun rises. We're immediately below the the gigantic seracs that bar the way to the summit plateau. The moment has come for the final push
Photo by Luca Rolli / Francesco Civra Dano

On 6 May 2016 the mountain guides from Courmayeur Luca Rolli and Francesco Civra Dano skied the Major Route down the East Face of Mont Blanc. Theirs is only the second descent of this line in 37 years, after the first descent carried out by Stefano de Benedetti on 7 September 1979.

It is in some respects the perfect run. From the summit of Mont Blanc down the immense East Face (the legendary Brenva face), plunging ever downwards all the way into Val Veny. 3300 extraordinary vertical meters following the Left Sentinel, known more simply as the Major Route, first ascended in 1928 by the Brits Thomas Graham Brown and Francis Sydney Smythe. A line that is described as being “uniquely beautiful", that was skied for the first time back in September 1979 by Stefano de Benedetti (accompanied by Gianni Comino who descended on foot), then never again. For various reasons. Such as the snow conditions, which have been absolutely outstanding this year. And, more importantly, because of the seracs that loom ominously during both the ascent and descent. These factors ensured that the Major route through the heart of Brenva has remained a dangerous and prohibitive dream, climbed only when that magical moment comes about. On May 6 this fleeting instant arrived for Luca Rolli and Francesco Civra Dano, two strong mountain guides from Courmayeur who, having set off at midnight from the bivouac Borgna Alberico at Fourche, ascended the route to the summit in 9 hours. And then - almost without any breaks whatsoever - skied what Rolli describes as "the descent of lives." Their perfect run.

"There is no way to escape the doing of our world, so what a warrior does is to turn his world into his hunting ground" Journey to Ixtlan, Carlos Castaneda

It's never easy to set off on an adventure like skiing the Major Route: when I close the door of my house I feel like I’m about to chase dragons, with all that this entails.

On the day we climb up to Fourche I’m bothered by an increasingly strong wind that continues to slap us in the face. As the hours tick past the mental pressure within the bivouac increases: we’re up against a monstrous face, 1300m high, sliced by deep gullies and protected by huge seracs: yes, the truth is, I’m chasing dragons. When I step out of the bivouac, roped-up at midnight, I finally find my inner peace: my heart begins pumping hard due to the physical strains, and no longer because of the mental anxieties. We climb in total darkness and the absence of light amplifies our senses within our chosen hunting ground. 6 hours later, below the final seracs, we’re greeted with warm and comforting rays of light that bring with them peace, plenty of peace. And then along comes the summit of Mont Blanc. All of a sudden I’m bowled over by a feeling of total relaxation and the monsters (or dragons) I was chasing are defeated. I haven’t won yet, but I realise that we cant do it, that today is our day, that nothing can distract us from realising this dream we've dreamt about for years, which I’ve trained for all my life.

The actual descent is fast and perfect, simply perfect. Down in the valley Francesco and I give each other a hug: I couldn’t have had a better partner. And now I realise that this descent has made me both stronger and conscious of the fact that the journey I embarked on in 2010, with out first trip on the North Face of Aiguille Blanche, is putting precisely into practice the words of Andreas Fransson: "life goes on and how we want it to go on is a choice, and even if we want to escape, there is no-where to escape: so we might as well make right now awesome."

From the Fourche bivy we needed 9 hours to climb - skis strapped to our backpacks - the entire route and reach the summit of Mont Blanc. From the summit we reach Val Veny in a little less that 3 hours. We skied the entire route from the summit of Mont Blanc to the valley with just 15m simul-downclimbing, and 2 small abseils. And this is another factor that makes this descent so exceptional: you put on your skis on the summit and manage to ski for 3300m. The angle on the actual Major Spur is sustained and the exposure is absolute. Good conditions allowed us to never have any doubts whatsoever and have complete confidence in our equipment.