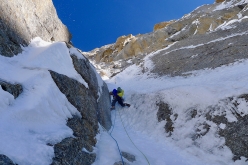 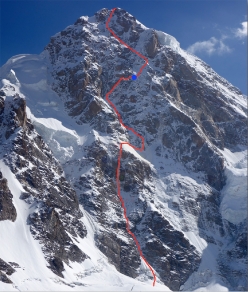 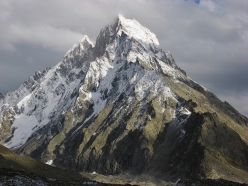 The duo arrived in the Miyar Valley on the 19th of September along with fellow BMG member Martin Moran and his climbing partner Ian Dring. They wasted no time in establishing an advanced base camp high on the Miyar Glacier and acclimatised on a nearby 6036m peak.

On the 27th September Dave and John set off, heading first for the Kang La pass (5450m) crossing point over to the northern side of the chain to access their objective, situated in the Temasa Valley. Over the next six days the pair completed the first ascent of ‘Raja Peak’ via a challenging, direct route on the north face. Transcendence (1200m, Scottish 6, ED2) tackles the steep, vertical corners in the lower, central half of the face before heading up and right to the upper wall. The team spent two days on the face itself and summited at 8pm on the 1st October. The pair then returned to their Advance Base Camp the following day.

"The whole outing felt very committing and a big leap of faith for us. It is a very remote corner of the Himalayas and with a 60km round trip from Base Camp, a 5450m col to cross to gain access to the peak and only an old picture from Martin Moran along with Google Earth to help us on our way, it had a very adventurous feel" says Dave. The pair reported generally good climbing conditions with enjoyable climbing throughout on good, compact granite.

After this route and still with some time still left over they managed to make another first ascent lower down the valley on the Jangpar Glacier to produce Last Chance Saloon (1300m, Scottish 4, TD-) The 5780m peak was named 'James Peak' after Dave’s nephew.

On the same trip highly experienced fellow Brit Martin Moran and Ian Dring succeeded in climbing their objective, too, the amazing looking rock spur to the right of Last Chance Saloon over five days to give Crocodile Rock (1300m, ED2, VI+). They named the peak 'Marakula Killa' after the Goddess Marakul.

Dave and John would like to say a huge thanks to Rab for clothing and equipment sponsorship and the Mount Everest Foundation for their generous financial support.

For detailed accounts check out the blogs of David Sharpe, of John Crook and Martin Moran.