► News ► Alpinism ► Birthright on Grands Charmoz: the route and the moment to remember by Rossano Libera
Versione italiana 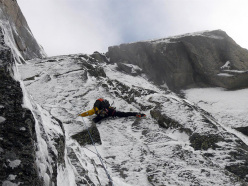 Searching for a (useless) alternative to the corner up and to the left on Birthright.
Photo by archivio R. Libera, C. Pozzi 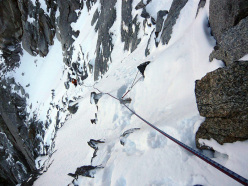 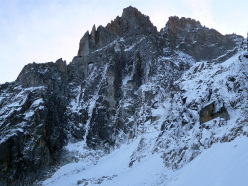 PORTFOLIO / gallery Portfolio: Birthright on Grands Charmoz: the route and the moment to remember by Rossano Libera

Birthright on Grands Charmoz: the route and the moment to remember by Rossano Libera

We just published the news about the first free ascent, carried out by Britain's Matt Helliker and Jon Bracey, of Birthright, the great climb established in 1993 by Mark Twight and Scott Backes on Grands Charmoz (Mont Blanc). A mixed route with a great menu that includes dodgy protection. Better still, one of those lines defined as "ephemeral", meaning that the difference and thus the difficulties are made by the "terrain" conditions. We were intrigued to find out more, hence we asked Italy's Rossano Libera to tell us about "his" Birthright, the one he tackled in 2008 together with Claudio Pozzi. Theirs was the first integral repeat of the route. And also confirmation that the "journey", in alpinism and also elsewhere, is always different, absolutely personal and never the same.

It was October 2008 and Mountain Guide's training courses were going well; my life was getting some answers to the usual questions. But it wasn't those answers I was looking for; I still wanted, needed, other questions.

Mixed climbing rules supreme when in comes to uncertainties; one route in particular still had a big question mark, at least for me. The topo stated "WI 6; V/A2" along 450 metres up the Grands Charmoz face. The problem was called "Birthright" and the desire to solve it had been driving me mad for a while...

My friend Claudio and I were driven by a common goal. From the cable car that ascends to Plan des Aiguilles the view onto the "problem" really comforted us; a stark white drip covered the entire line!

We quickly headed to the base, excited and already enjoying the foretaste of success, but what we saw there made us sink into utter despair. The reason for that white line wasn't solid ice but a candid sprinkling of snow that had fallen a few days ago.

Turning back would have been the obvious and wise decision but strangely that vision, instead of proving disheartening, was a prime invitation to uncertainty. I hadn't travelled all this way just to know about the good conditions of the face; the best conditions lay within me and so the decision was obvious.

Like the year beforehand I had been lured by the bait my pride had thrown at me, the hook on which it had been placed was yet another mixed route by Maestro Twight. At the time I shared my delusions of omnipotence with Viviana Savin from Cogne. The pretext of making a single-day ascent of the integral version of "Beyond The Good And The Evil" completely dulled the pain which the route, in its almost dry condition, induced. That very same optimistic vision which made us observe a watch perfectly still twice the same day launched our ambitions upwards.

"Birthright" left a mark and only afterwards did I realise how, up there, I experienced the most profound and real rapport with my psychophysical limits. At every belay I swore to myself that, as soon as Claudio had reached me, I'd hurl the abseil ropes and return to the horizontal dimension, but my partner's enthusiasm always dashed my intentions and reignited the crazy idea to continue...

This is where the magic and charm of these sorts of routes lie, where the topo indicates the conditions which the first ascentionists had and finding the same is by no means simple nor taken for granted. Every repeat is a story in itself.

For Matt Helliker and Jon Bracey it was a brief escape that lasted less than 4 hours. For Claudio and myself it was a true ordeal which lasted for two days; the most intense two days of my life.