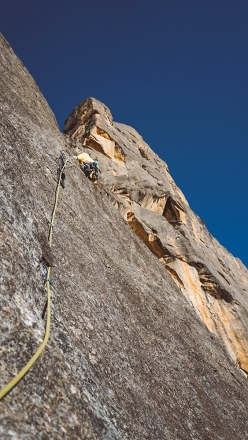 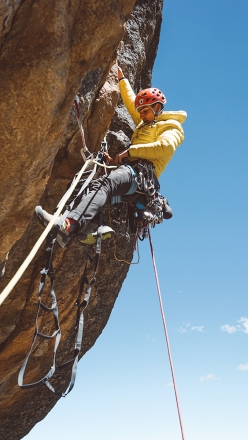 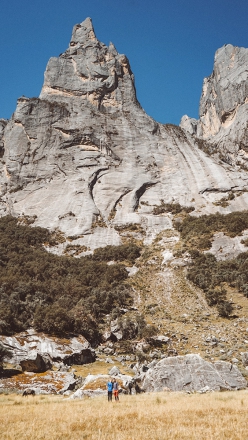 Jaume Peiró and Álex González have completed the first ascent of Big Fighter (8a+? (6c/A2), 750m), on the Northern arete of Chaupi Huanca in the Cordillera Blanca in Peru.

Spanish climbers Álex González (18) and Jaume Peiró (20) have recently spent 4 days and 3 nights establishing a 750m routeon the 4850m high northern arete of Chaupi Huanca in the Rurec valley in Peru’s Cordillera Blanca. The route takes a line to the left of Qui Io Vado Ancora (Fabio Palma, Andrea Pavan, Simone Pedeferri, 2006) and had been attempted by two previous expeditions, one from Argentina and the other from Ecuador, but neither had been unable to make significant headway.

González and Peiró are currently on a 3-month climbing trip to South America and on entering Peru they acclimatised at Hatun Machay at around 4500m before climbing Esfinge 5235m in Parón via the classic 1985 route. Helped by porters to carry their 70kg of gear the pair then ventured into the Rurec valley before setting their sights on the obvious needle which they summited on 3 July, having breached difficulties up to 8a+? (6c/A2).

The new route has been called Big Fighter, in honour of González’s 15-year-old brother who has been battling against cancer for several year. "A real fighter, this is for him and for all those children who continue to fight every day!"

10.09.2017
Spaniards claim two new climbs and one first free ascent in Peru
The brothers Iker Pou and Eneko Pou, together with Manu Ponce and Pedro Galán, have made the first ascent of two new rock climbs in Peru: Yaku Mama (7a+ / 185 m) next to the Gocta Falls in Amazonia, and Zerain 8a / 860 m in the valley of Quebrada Rurec in Cordillera Blanca. In the same valley the four also made the first free of Qui Io Vado Ancora, the route put up in 2006 by the Italian Ragni di Lecco climbers.
13.07.2006
Qui io vado ancora, new route in Perù by Pedeferri, Palma, Pavan
On 12 July the Italian Ragni di Lecco Simone Pedeferri, Fabio Palma and Andrea Pavan made the first ascent of "Qui io vado ancora" 7c max, 7a oblig with two pitches of A1 in Peru's Quebrada Rurec valley.