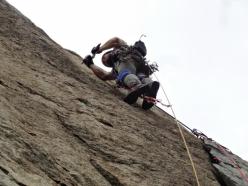 On pitch 1
Photo by Diego Pezzoli 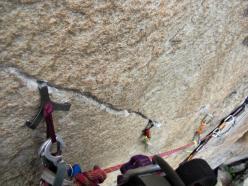 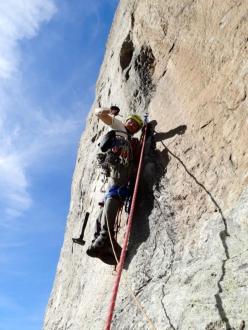 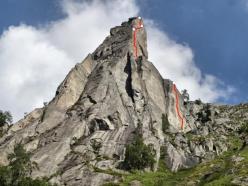 The report by Diego Pezzoli about the first ascent of Baba Jaga (V 6a A2+, 180m),a new aid climb up the Maslana pinnacle, above Valbondione, Italy.

Probably the first modern aid climb in the valleys above Bergamo in Northern Italy. This, in brief, is Baba Jaga, the aid climb established between 2013 and this year up the splendid Pinnacolo di Maslana by Diego Pezzoli – on a roll after his aid climbing in Russia and Norway – together with Alberto Gentili, Eros Milesi and Pietro Cocchetti. This 4-pitch outing breaches difficulties up to V 6a and A2+, and obviously requires a vast selection of RURPs, Beaks, Hooks, Heads, Lost Arrow as well as nuts, micronuts, Friends etc.

Oneirics Visions
An afternoon of few years ago, I was walking into the woods that leads to the Serio’s Falls through the picturesque village of Maslana.
It was an autumnal day, gray and misty, so much that I immediately lost the trail.
Suddenly, as I arrived at now at a channel, I noticed on the left side upstream, a strange construction. It was very foggy, but I'm sure that what appeared in front of me, even at that distance, was placed on two huge chicken legs.
Intrigued, I went into the wilderness. It was getting thicker and thicker, as much as the darkness that blew out all my doubts, so much to forcing me to spend the night in the cold, accompanied by terrifying noises.
Unexpectedly, a white dressed man riding a horse with white harness went through at full gallop and a bright dawn surprised me. So I continued to walk on towards the supposed house driven by the desire to know and clarify what I had seen. At a certain point I saw t another night coming at trot, this time all decked out in red on a red horse.
The sun rose then up.
Only late in the evening, after passing the grassy slopes, hard rocks, a thunderstorm and hail, I get to the upsetting home. I don’t hide, fear had taken possession of me, when unexpectedly a last knight all black dressed arrived on a black horse. It became night again.
A strong wind started to blow, trees and rustling leaves announced the arrival of a scary witch. The woman was traveling on a flying mortar with a pestle in his hands which she used as a rudder and a silver birch broom with which she erased the traces behind her.
Baba Jaga, that was his name
Actually she was following me and she put me through harsh tests from a long time. She sensed that I was searching for knowledge with all my strength.
Indeed, I unwittingly wanted her help. Usually, it’s a dangerous action that requires preparation and purity of spirit.
The old omniscient woman, lady of time, of death and life, decides to save me, and in order to reward me for my perseverance, she gives me even a tool similar to a claw, saying that in the future it will be helpful and it will help me to deal with very difficult situations.
For fear of not being taken seriously, I didn’t tell anyone that experience ...
…till now!