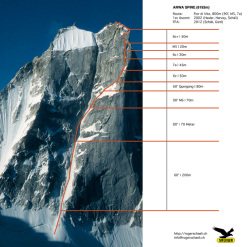 In 2002 Swiss alpinists Stephan Harvey, Bruno Hasler and Roger Schäli travelled to the Indian Himalaya where they made the first ascent of Fior di Vite, an 800m line with difficulties up to 90° VI+ and A2 up the North Face of Arwa Spire. Reaching the 6193m high summit was a huge succes but evidently the thought of having used aid played in the back of Schäli's mind over the last decade, so much so that he returned in 2012 together with Italy's Simon Gietl to attempt a free ascent of this prominent line but before setting foot on the mountain proper, tragedy struck as their friend and cameraman Daniel Ahnen fell into a deep crevasse. All rescue efforts proved futile and the expedition was abandoned, and this accident played heavily on the climber's minds in the difficult months that followed.

Schäli and Gietl returned this September with a small team comprised of mountain guide Andrea di Donato, photographer Frank Kretschmann and Schäli's partner Yuri Kato to attempt the summit once again and also to bid farewell properly to Ahnen.

The weather proved outstanding and the four quickly established ABC at 5400m and, after having fixed ropes on the initial snow slope, Schäli and Gietl set off at 4:00am on 28 September. Climbing fast and free up the cold North Face, the duo breached M5 mixed and 7a rock at 6000m altitude to reach the summit at 15.00. In what proved a touching moment the two left a medallion in honour of their friend and then quickly descended the same day back down to ABC.